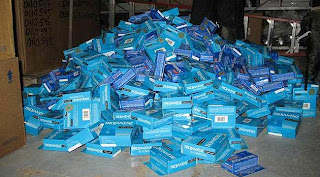 As the last supply delivery was made to the South Pole station run by the Americans....it brought one key pallet....with 16,488 condoms. As the chief of supply had to explain once the cat got out of the bag....even though they are entering the winter period this week, and only a hundred folks will be there....this is the entire yearly delivery....so when summer comes in six months....1,100 folks will be there and they will be having hot lusty sex hour by hour. Well.....maybe day by day.

I've often wondered what the heck the folks do in the bunker.....after they finish their eight-hour shift....and now, we know. Obviously....if you figure 16,488, divided by the 100 winter folks and the 1,100 summer folks....then you figure a five guy to one gal average....then you count out the PhD folks who don't ever think about sex....then you count out the hardcore Baptists.....you come to an average of one guy using six per day (my estimate). I'm thinking these guys are pretty hot-blooded....and don't need any kind of stimulation. Forget about Hooters, topless joints, X-rated videos and Britney Spears.....South Pole sex must be awful dang good.
at Tuesday, June 10, 2008