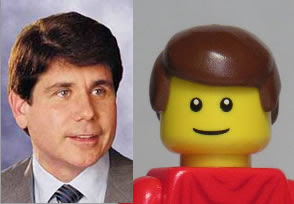 After looking at the picture for a while.....I kinda agree it is a Lego-version of Blago. I don't know how you'd work up the Lego scenario for this.....one Lego guy calling Blago Lego to deal a senator seat? It just doesn't work good in the "pretend-world". Now, if Blago had been getting a house or maybe a helicopter out of this deal....that would be a neat Lego scenario.
at Sunday, December 21, 2008