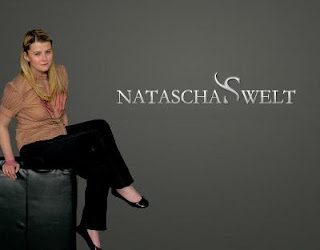 This week, in Austria, quietly and without worldly fanfare, Natascha Kampusch announced that she would be starting a interview show on Puls 4....network starting up on cable in Austria.

For those who don't remember Natascha....she was the kid who was kidnapped around age 12 and kept a prisoner by a guy in his garage (the grease bay pit). For eight years....he kept Natascha a prisoner......and only by a mistake....he put her into a position to escape....and she finally got away.

I sat and watched her a few weeks after the escape....where they had a live interview with her. I expected a "lost" individual....someone with issues and no ability focus. I was wrong. Out of 100,000 individuals he could have kidnapped that day.....he picked the only one who had resolve and could survive. Natascha took the TV he offered, the books, and the magazines.....and simply forged ahead. She learned things the hard way....but she learned from a vast audience....with only time to absorb and perform self-analysis. The other 99,999 would have become idle and despondent.....seeking no information or reality. She was different.

I find this career move to be unusual....but probably the best job in the world for a person like her. She absorbs the situation.....the information....and mentality comes to conclusions. Its hard to think and react like this. Most folks are always a step behind.....Natascha likely thinks a step or two ahead. She is not "lost" and certainly not a nut as one might expect.

I have high expectations from this young lady.....who is capable of so much in my mind. I'm thinking in the years to come....she will emerge as a major interviewer in Europe.....and probably be respected for thinking beyond what would normally be expected.
at Thursday, May 29, 2008 1 comment: