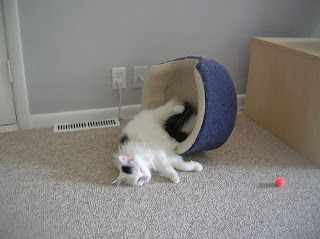 Email ThisBlogThis!Share to TwitterShare to FacebookShare to Pinterest
Labels: falling

The went to the extent this week….of announcing it will excommunicate anyone….absolutely anyone….who attempts to ordain a woman as a priest, and the woman priest herself. Some dude named Cardinal Bill Levada felt that this was necessary, with things going out of control. Officially, the best we can say….is that around 40 to 50 women priest exists today….although none are recognized by the pope.

Its an amusing situation. The number of guys desiring to be priests drift downward every single year. You can’t readily recruit these guys, and you can’t contract out. In fifty years, I’d be guessing the population will be half of the current group….and you will have to wonder how the religion will be able to carry on.

Why continue the fight against the idea? Well….its more of a historical thing….because why change when history sits on your side. Then you add in the situation where women always want rearrange things and it’d just trigger trouble. Then you have the issue of voting on the pope and potentially it being one day some old lady….and most Catholics just can’t see that scenario.

The best answer here? Give up….let the Baptists win, and just take the gold and silver back to . Face it….its a lose-lose scenario otherwise.

So this is a story that an associate told me about ten years ago. It involves his aunt & uncle, and his cousin. I will assume for all practical purposes on the truthfulness of the story, for at least he knew the three parties involved.

The aunt & uncle had been married for almost 30 years and had three daughters. Daughter one and two had finished high school and dad had paid for both to attend a local state college. Daughter one finished and ended up as a teacher, and daughter two finished to end up as a advertising hiree with a local TV station. Both had a decent salary….one was married….and both owned their own houses.

Daughter three came to finish high school, but two months prior to finishing….she announced that she wasn’t going to college and was now engaged to marry in June. Shock settled in for mom and dad. The groom? He was a local guy who wrapped up one year of college and quit. The guy spent a year with some commercial delivery service before becoming a salesman with some brick & lumber company. After five years of working as the salesman, the guy had a corvette and a rented apartment to show for his earnings….and little else. The guy spent money freely between casinos and weekends, so nothing was ever saved.

With the college plans shoot, dad had plenty of money to pay for the wedding and then intended to give a $15k check to the couple for whatever they wanted. That wasn’t the dream of the third daughter. She looked at the other two sisters and then determined that “Junior” and her deserved a house (bought and paid). So pressure came to bear, and dad came to the idea of a starter house and paying down $20k…which starter houses in the area were in the $120k range and thus this check of his and the grooms input would make this an affordable mortgage.

This logic held for a day, and then the daughter summarized the unfairness of the situation…her sisters had houses of value in the $150-200k range, and sadly…”Junior” had almost nothing to put down on a house. His salary was such that he could afford more than $700 a month. Dad then hinted that “Junior’s” parents ought to help contribute….which they agreed to funnel $5k into the contribution….thats it….no more. $25k total….with a $700 a month payment….didn’t equal a $150k house.

So eventually the deal was made with dad putting almost $35k into the deal and the daughter ended up with a $145k house.

The marriage ceremony came and went, and for a year….this deal worked. Then one day, the daughter came and asked dad to cover a month’s payment on the house. The two wanted a trip to a local casino and needed the $1000 to cover cost. Dad didn’t agree this time, and it triggered an argument.

A month went by, and a major car repair came up, with the daughter asking for $1000 to cover the bill, which Dad paid….and then discovered the couple left over the weekend for a casino trip.

A few months passed and the daughter appeared, asking for money to cover another car repair….which dad refused. The daughter insisted that this was a real necessity and yet no money came.

Somewhere toward the end of the second year….the couple broke up. Amongst the chief reasons, money. They couldn’t make the mortgage payment every month and cover lifestyle requirements. The daughter moved out and moved into Dad’s house. The divorce came and went….and the house had to be sold. The daughter came to be shocked in that the house barely made what it originally cost. By the time the bills were figured and the bank costs….the couple basically split $30k between them….with her share being $15k.

The daughter then insisted that she needed to go to college and dad should cover it like the other two sisters. Dad refused and told her to use the $15k that she had from the house sales….because that was her original college money. Needless to say, she wasn’t happy. After two semesters at college, she dropped out and ended up marrying some forty-year old guy who already had a house. There was no ceremony, and no cost for dad….he was happy about that part.

My associate went back to visit after this part of the episode….and the cousin was sitting there in a corvette that the new husband had given her. She was the trophy wife and enjoyed the attention. She lived in a huge house and lived lavishly….more so than the two sisters. No one appreciated her company.

I asked my associate what he thought she’d be doing in twenty years, and he figured married to husband number five. Its curious how you can see the path of someone start, and predict how the path will go.