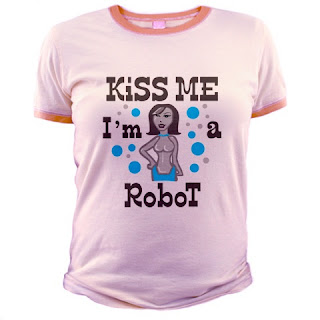 So some Japanese folks...who are real smart....have developed a female-like robot. She's only 15 inches tall and costs around $175, running off AAA batteries. You can see the implications here,its for lonely guys.

The thing here isn't so much this robot but the concept....which you know is coming soon.

Will this be coming to America? The next thirty years....I would doubt it. The cost would still make Wanda Jean out of Shreveport still the best option possible for a wife. But as we cross over 2050....and they cut down the price of the Ricki Robot....and make her more human in nature....they will finally reach the American public and guys will be saving their money to have a fake companion.

It'll be a dismal day for woman across America.....having been defeated by the Japanese crowd. Its not the thing you really expected....having some robot gal who does what a guy enjoys....and ends up being his life-long companion....forever....forever...forever.

As for me getting a Ricki Robot gal? Pretty doubtful....if I had $100k....I'd rather spend on a pontoon boat....rather than a robot. Plus I'd be thinking she'd be upgraded to Vista sooner or later....and then she'd be all craped out and non-functional.
at Wednesday, June 18, 2008 1 comment:

Allow Us to Screw You Over

Amusingly enough....he was second in the state to ask for this. The council over in Holly Springs already approved a $12 fuel surcharge fee to each speeder that they catch.

If gas goes to $6 a gallon....I'm guessing they will up the extra fee to $25. Pretty nifty idea.....helps to screw people over completely....by using the gas crisis as a financial crisis for their little pavement area.

I could see this mentality spreading. Going to do a law suite against the town cops? Add on a $15,000 surcharge gas fee to the expenses you are seeking. Going to make a trip to Wal-Mart....expect a $2 surcharge gas fee when you enter the front door. Going over to the bar & grill to get blasted on cheap booze? Then Ed the bartender is setting a $2 gas surcharge on your bar-tab when you start drinking.

We could make millions and millions off this game. Everyone could get a gas surcharge. Show up at the house one night....the wife is in fancy black leather stuff....the kids are visiting grandma....and you've got some pretty lusty ideas....then the wife says a $15 gas surcharge as you start to discuss your intentions.