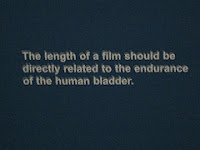 For forty odd years, I've walked around with this thinking in my head and never thought much of it. Today, I was standing there looking over at Flickr....and came to this picture....and started browsing. I had never grasped the significance or understanding of truism. a little knowledge can go a long way.

So here are a dozen-odd truisms to drive home the point.

A positive attitude means all the difference in the world

A relaxed man is not necessarily a better man

Absolute submission can be a form of freedom

Boredom makes you do crazy things

Don't place to much trust in experts

Every achievement requires a sacrifice

Government is a burden on the people

Humor is a release

It's better to be a good person than a famous person

It's not good to hold too many absolutes

Nothing upsets the balance of good and evil

Pain can be a very positive thing

People who go crazy are too sensitive

The world operates according to discoverable laws

You can't expect people to be something they're not
at Sunday, June 22, 2008 No comments:

Email ThisBlogThis!Share to TwitterShare to FacebookShare to Pinterest
Labels: truism

Since Friday night, I've been browsing various forums which discuss the gas price episode, the futures players, and people discussing how this is effecting today.

There are several obvious things that stand out in this analysis.

The majority of folks believe "the issue" is competition by China and India to buy gas...not the futures crowd. But if you ask them about the futures business...they clam up and admit they really don't understand it. The competition crowd also believes that our lack of drilling in Alaska and the gulf region....is the chief reason that the oil price has gone up.

The pressure on congress over the next month to open ANWR and the Gulf? It'll be significant and a major retreat for the Democrats. The majority of folks believe ANWR is now history.

Now we come to the beef of this blog....the effect.

Its fascinating the directions that people now believe this episode leads to. First....if this is a futures "balloon", then that balloon will burst. It may be next month, next year, or even in five years, but this balloon has to burst. Because of the number of pension funds involved....there is strong speculation that a national financial crisis will occur, with some folks losing a vast amount of their future pension. Congress will likely have meetings to discuss why this was so stupid and why no one acted (to include the idiots themselves).

Once the barrel price tops $200....the effect on people will start to branch out and trigger a reflection upon habits, lifestyle, and the future.

Airlines in the 1950s and 1960s....were a thing for the folks of wealth. In my hometown of Florence, Alabama....there might have been 40 people who had flown commercial airlines in the early 1960s. Most were people who had a significant income and could afford to pay big tickets. It wasn't until the mid-1970s that cheaper discounted tickets and hubs started to make airline travel a possible action for the regular guy on the street. At the current rate....by the end of 2009....we might be at a point where a normal ticket is now double what it was in 2007. The folks at the bottom of the middle class....will begin to pass on airline travel....for any reason. The folks who paid for their daughter to fly four times a year back to Mississippi from her university in Maryland? They will likely cut this flight activity down to two times. The guys who bought the cheap Vegas tickets for a weekend for them and the wife to have fun....will stay local and avoid Vegas.

Will places like Disneyland and Vegas suffer? Yes....without any doubt. Vegas might be seeing a 20 percent cut in its daily traffic by the end of 2009. The Disney crowd might notice the same thing. If I have to pay more for fuel and tickets.....maybe I'll just stay home.

The speedboat crowd? You could burn up 30 gallons of fuel on a good day at the lake on your boat. When it was $2.5.....this was a reasonable cost for a day. At $5.....around $150 for the tank.....you will start to cut back the usage....and eventually question why you even need a boat out there if you only use it six times a year.

The RV crowd? They lose on every tank of gas. The whole industry may be in serious trouble within three years and you might just see three or four companies surviving after that point. It'll be strictly the rich who end up running these.

Cops will likely have a gas-bill for every single ticket and arrest that they make. The fee will be passed straight onto you.

The fire department gets a call to your house....there will likely be a fee somewhere in their bill....that you end up paying.

We are in a lifestyle spiral....forced into change...whether we wanted it or not. We had an acceptance of $2 a gallon for gas....NOT $4 a gallon. We had plans each year to drive $300 of gas to visit Grandma and family on Thanksgiving....but at $600....its just not worth the trouble. We dreamed of the $5k trip to Christchurch, New Zealand, but now discover the ticket is $7k....and our dream is ebbing along into the sunset.

The amusing thing is that we will still cut the grass each week and waste a gallon or two there....to make things presentable. We will still offer to drive the neighbor to their doctor's appointment sixty miles away....because it was the right thing to do. We will still drive over 150 miles on the Friday after Thanksgiving to shop at the mega-mega-mega mall and buy the right Xmas presents. And we will still drive 40 miles to watch some demolition derby match on a Friday night without the wife.