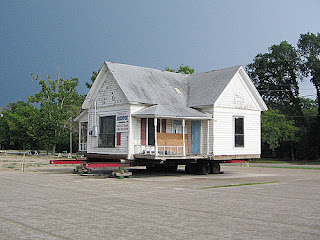 So sometime in the night two weeks ago....that Governor's mansion in Texas burnt to a fair degree.

The governor came out....and did his best to avoid weeping....and said damn....we gotta rebuild this thing back to the way that it was. Yep....he didn't say that they'd spend tens of millions....which is the likely price tag....but you got to expect Texans to be stupid enough to rebuild the damn place.

Then in the last week....the boys came out again....and said that some country and western singers are going to help make up some money for the damn state....to rebuild this...to include Travey Byrd, and Clay Walker. I'm guessing that Willie Nelson will show up....and maybe all of the former Dallas Cowboy quarterbacks for the past forty years.

Then someone from the state office said that the building will have to be built "green". For those from Ripley, who don't get it....this means its got to be environmentally friendly....so folks.....get wise here....it isn't going to look a bit like the old governor's mansion that existed. So I'm sitting here.....thinking long and hard. Who the heck burnt that thing? Cause I'm thinking they are environmentalist at heart. This was some planned episode....to redo the whole image of the state....going from old Texas look....to green environmental Texas look.

So here I am....thinking long and hard....being from Bama....and I'm thinking....what the HECK. Lets not waste time here or money. Lets get the governor back into a real Texas home real quick. Up highway 44, over near Wichita Falls....there is a fella who moves excess houses around. And he's got a beauty up for sale....just $20k, and you got yourself a real Texas house.

So my plan is this....every Texas resident pays a nickel....and we buy the damn house. We get the 300 Texas rangers lined up between Austin and Wichita Falls....and we cross half the state on the interstate system...with this damn house. We'll drive around bridges and power lines....and get that damn house over to the governor's lot in just a day or two. Put up a post box....and put a car up on the cement blocks....and there you go....a real Texas home.

Forget this damn environmental stuff....the green stuff....and spending $40 million on Argentine oak to be shipped in. We will get a real Texas house that any regular guy would be proud of.
at Saturday, June 28, 2008 No comments: