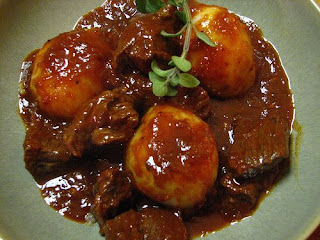 There are these rare occasions when you sit down and order a meal....and you end up with the best food of your life.

This past week....I spent time in Berchesgaden, and ate out a good bit. About five km's over in Ramsau.....on the main drag through town....there is the Gasthaus Oberwert. You'll see the parking lot on the opposite side of the building, laying 50 feet down, right next to the river. Park there and walk up the steps to the Oberwert.

If its warm.....sit a while out in the beer garden, and sip some of the best Hofbrau beer possible....preferably a 1-liter cup.

Order the Goulash with potatoes and then sit back to weep up a storm as the old gal serves it to you. You could have ordered it with the dumpings...but I prefer the potatoes. The minute you get to the gravy......you start have a tear.....knowing nothing can taste this good.

It was a 5-star meal....with a terrific beer. I later had homemade apple pie and the strongest coffee that God would ever allow.

I got up from this outdoor beer garden, and walked away.....knowing I'd just had the best meal of my life. You can't find a place like this normally....its in a mountain valley, in the middle of nowhere. A simple gasthaus on the road through town. The curious thing...is that it lies barely 100 feet from the tiny church where "Silent Night" was originally performed. Across the street is a butcher shop.....run by the family who runs the gasthaus. So you already know that you get the freshest meal possible for the Goulash.

So if you ever tour through Bavaria.....and go as far into Berschesgaden as possible.....there is this special dish you could try. Its worth the trip.
at Friday, July 04, 2008 No comments:

Come and Visit, But You Must Stay

Its a curious thing....which we don't know what senator or congressman did this....or what aide was helping them or even what lobby group was behind this......but hidden deeply within new tax laws.....is a clause to punish those who renounce their citizenship.....and try to leave the US. Its basically called the "Hotel California" Tax, checkout any time you want, but a good chunk of your money can't leave. The first $600,000 in estimated net worth is exempt, then the tax kicks-in at regular rates. Thus, this tax creates the potential for huge taxable phantom gains, with huge cash flow ramifications.

The additional part of the deal applies to foreign workers who live here for a period legally, with green cards, and then try to leave. Immigrants are stuck because the tax creates incentives for them to remain in the United States....even if they were unhappy. Secondly, the tax will appears to discourage high income, highly skilled foreigners from entering the country in the first place.

No one in the house or senate will claim credit or explain what lobby group pestered them into this episode...I'm guessing it would be a Republican.....but its just my humble belief.

Some folks are referring to this as a Zimbabwe-type effort.....where your money...."is our money".....even if you earned it and wanted to leave. I kinda laughed at this hint....because if I wanted to take $80 million out of the US in a couple of days without government interference....I could. The idea that the US government owns my money and could take it if they desired.....starts to become a joke in itself. My curiosity is simply to know the idiot who placed the bill into record. If we find that guy....we find the lobby group.....and things get real interesting then.
at Friday, July 04, 2008 No comments:

I have sat and pondered this FARC rescue episode that occurred two days ago. Several things are rather amusing but you have to dig to grasp this.

First, the Colombians will tell you that they had people on the inside of the FARC.....in the top echelon of leadership....and they convinced the folks holding the French woman and the three Americans that a authorized helicopter would land, with the crew wearing Che t-shirts, and deceived the group holding the prisoners completely. All of this was done without the help of outsiders (the CIA). And it was a wonderful and great rescue. Yes......wonderful and great.

Well.....at this point....if you are watching the Cultural Nuisance Network (CNN).....its certainly "a DRAMATIC and UNUSUAL rescue unlike anything we've ever seen".....you start laughing. The amount of analysis offered on CNN International....is about the same you'd expect on Bass Pro Shop on the subject of beer drinking while boating.

So lets stand back here and analyze this. First.....the FARC leadership really hasn't changed much in twenty-five years. There isn't a school to train these guys and you'd probably judge the mental and leadership scale of these guys as a "5" on a scale of one to ten. Once you stood back and realized everything works off cellphones and satellite telephone systems....then you start to listen in. To get to that point....you needed to accept the fact that Venezuela's Mr. Hugo Chavez was helping to funnel everything.

You add in the fact that Senator McCain suddenly shows up in Venezuela this week, when all of this is going on....his only trip to Venezuela in years....which makes this a bit amusing how he arranged this all. And then you add in the French element.

I have no doubt that FARC dimwits basically played out the entire game.....and never grasped just how stupid they were. The Colombians finally came to agree that they just weren't that bright.

At this point....there is very little that the FARC can negotiate on. I'd even start to wonder about this statement about someone being in the top ten leadership who is a fraud and working for Colombia. I'm guessing Colombia did this on purpose....figuring that the FARC would eventually shoot half the leadership in hopes of solving a problem....and then realize that there never was a traitor in the midst....just a bunch of phones that were bugged.

As for the Cultural Nuisance Network.....stand by for more detailed analysis and possibly some great Bon Jovi music in the background as they try to make a realistic fake documentary on FARC.
at Friday, July 04, 2008 No comments:

Email ThisBlogThis!Share to TwitterShare to FacebookShare to Pinterest
Labels: FARC

A Land So Strange

I rarely offer an analysis on a book that I've read....except in rare cases....so during my trip to Bavaria....I finished off "A Land So Strange", by Andres Resendez. Its not likely to be read by most folks and probably unlikely to be offered in your local library. It was recently published by Basic Books.

This is a historical report on the journey of Cabez de Vaca in 1528 and lays out a pretty nasty adventure that simple runs on and on and on. Out of 300 Spanish dudes who ventured on this expendition.....four returned alive....the rest dead. This was the type of situation that no one was trained for, and as the writer lays out the journey on the vessels and on the trails of Texas.....you really start to feel bad for the individuals who did survive in the end.

I would strongly advise the book for history buffs and those who have a curiosity of life in the 1500s in America. It was a rather odd period when nothing was really happening yet....and the Spaniards were arriving weekly to discover vast amounts of gold.....which really didn't exist. And you come to a point in the book in relations to Indians....where you have to admit they did get the short end of the stick.....by the Europeans.....but in some cases.....they really deserved it.