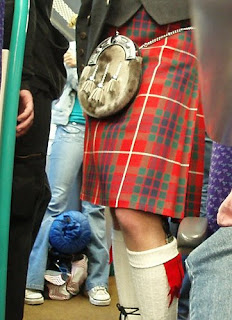 This week...some dude came up to the Postal Service and put in a request to wear a kilt. The management guys will likely spend a month or two evaluating this.....and I suspect that they will deny the dude this clothing option.

My dad worked for the kindly postal folks for thirty-odd years. To say that they are a bit conservative.....would just be the start of a long-winded joke. The least that I can say is that they don't insist on a color or type of underwear.....but if they had a preference....they would.

I'm not much of a kilt dude. I can wear shorts on a pretty hot day, and not feel silly (at least for a 49-year old dude)....but the kilt thing would be pretty hard for me to accept. Most southerners aren't exactly believing in this as being acceptable gear. And for a postal employee....it'd be the butt of a number of jokes on the rural route ifing you were to drive around and deliver mail in such a get-up. Several older ladies would likely come out each day and chat with you....smiling and gazing upon your legs in the mail truck. They'd ask silly questions about if you were wearing underwear or felt real "hot". Eventually....they'd invite you over to the house for a ice-tea....then suggest some indecent acts....and you'd just get into trouble at that point. Its just inviting incidents to get you fired.

So we are better off....without this kilt business....in my humble opinion. Unless, we'd like to meet some kindly hot older women for lusty affairs on the mail route.
at Saturday, August 09, 2008 No comments:

How To Screw Up An Honest Business

Imagine yourself in the Surface to Air Missile (SAM) business. You've been doing fine work within your country and then decide that you need to take your best work and sell it outside of the country. Course, this is for cash, which would kinda make Larry and the assembly crew happy to have real cash, instead of fake cash as their pay-off.

So you market this fantastic system you have....the S-300 SAM. Lots of bells and whistles, plus its got dynamic chairs for the crew to sit in and feel real military-like.

The country you decide to sell this missile system to.....has cash....and has enemies. Both mix quiet well in the SAM business. Ifing you ain't got no enemies....that really tears the heart out of any negotiation.

So your buddy looks over the system and starts to talk real business....real cash....and a real transaction. Then, like a sudden touchdown in Auburn....things go out of kilter and you start thinking about whats going to happen here. The enemy of your friend....says that if you deliver such a system to so-and-so.....they will put a electronic ka-boom onto the electronics of this SAM, and basically make it totally worthless. Then you suddenly wake up from a sweaty sleep to realize that if they can market this electronic ka-boom stuff....your entire SAM sale to other countries goes down the drain fast. You get one sale....and then thats the end of that deal.

So this week....Russia woke up to be that salesman, and Iran was the intended customer, with Israel as the enemy of Iran. Based on press coverage so far, it is a sad woeful tale for Russia now. They'd really like to make some cash, but then they kinda realize that Israel will develop some counter electronic system....that will make the S-300 worthless. Maybe you could build some features into the system.....to counter the Israel improvement....then they'd just add a few fixes to their system....and thats the end of any S-300 threat.

Russia has to be standing there....wiping the sweat off the brow.....wondering where things went wrong. They had such a great deal....and great future deals going on. Life was improving for Larry and the assembly crew.....actually making real cash now. And now this mess.

I'm thinking Russia will surge ahead and deliver the dang system....because any real cash is better than no cash. And when the missiles fail....well....thats the end of this sales gimmick, and you can start developing the S-301 series....which might be marketable in three years. And maybe the next regime of Iran will kinda desire this weapon. Thats life in the weapon sales business....things come....and things go.
at Saturday, August 09, 2008 No comments:

The Wiki Wars and John Edwards

While John Edwards was singing yesterday and admitting some of his affair business (but the kid isn't his).....we have to come back to the Wiki world and kinda revisit the dimmest of efforts to report world history.

The Wiki editors are now kinda stuck....they will have to allow in a paragraph to say that John Edwards did have an affair but the kid wasn't his. The whole National Enquirer paragraph will likely be pulled (entirely) . The discussion area on the whole topic....sanitized. It'll be a nice weekend to correct all of their heated issues and problems....thus getting rid of the predators who strolled on Wiki grounds....with heartless souls.

After viewing this entire episode.....one has to sit back and ask why Wiki exists.....if it is so tightly controlled and the editors control so much. I even sat and watched the Wiki visitors try to create new topics of Wiki over the name of this child in question. As of Thursday night....the topic had not been allowed yet. I'm pretty sure that the childs name will never be allowed in Wiki....just my humble opinion.

So onward we march....out of this amusing tale of John Edwards. Personally, I'm hoping that John gets cleaned up, that Obama wins the presidency, and then Obama blesses John with a ambassadorship to Thailand or Peru. I'm thinking John would really appreciate such a high position and quietly enjoy a tour of duty in Bangkok.
at Saturday, August 09, 2008 No comments: