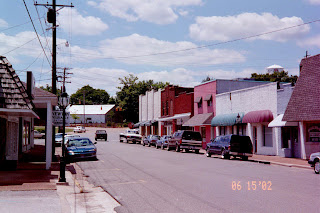 Down abouts Bama, between the dry city of Athens and the dry city of Florence, is a piece of road referred to as Highway 72. In the midst of this mighty US highway, is Rogersville.

Election year is upon us in the area of Rogersville, and Harold Chandler is running for Mayor, to extend out his period as the town mayor. In the recent issue of the East Lauderdale Times (a privileged paper that I get once a week)....Harold put up a half-page advertisement to credit himself for so much of what Rogersville has achieved.

Somewhere in the midst of this advertisement.....Harold claimed the great improvements that the town had made and the search for programs to enhance the town's image. Alot of these projects actually involved money, which is shocking that this town of 1,199 folks hasn't grown that much over the past five years. True enough, McDonalds did come in ten years ago and bring in some town revenue via taxes. And there is a new restaurant or two in this backwoods town. But the revenue chart ought to be kinda flat and not expanding.

But here, Harold does a great job in the advertisement in explaining this situation with more funds to help the city. He expanded the police force and the number of cop cars. This town of 1,199 folks, has five full-time cops.

Now, you'd be sitting there and scratching your head....for a town in the middle of nowhere....of 1,199 folks....you'd think that two or three cops would be all that you'd ever need. There must sure be alot of crime in such a town. For the period of 2005-2006, no murders, no rapes, and no robberies. They did have a total of five assaults and 29 houses broken into. And they even had four cars stolen.

Another interesting fact....if you go check....a normal city of this size in America....has three cops. The town is a bit over. Would you wonder why?

So now, I'd like to welcome you to Speedtrapville (it should be Rogersville, but its not). This is a town that maximizes the use of US highway 72.....and gets the most bang for its police manpower. They not only make enough to sustain the five cops, but also afford new cop cars, and even help the city budget to generate more revenue to use on various projects for its citizens.

Its a tidy game. You get the cop out on the main road in the morning and give out six tickets in a three-hour period. The afternoon....another six to eight tickets. When you have both cops at the ends of town....you multiply the numbers by two.

So as election day comes upon us....let those who live in the quiet little town of Speedtrapville enjoy their improved services and enhanced revenue generated by the mayor and his proud boys over at the police station.

Somewhere down the line....there is a settlement of debt....where enough people who passed through and bought gas or coffee or a burger....just don't stop. They drive on. They don't buy the $40 of gas or the $8 for a breakfast. So the use of this speedtrap situation will double up....as general tax revenue doesn't match up to previous expectations. And as more folks get upset and fail to stop....the trend just continues on. Pretty soon....the chief money-maker of the town....is speeding tickets. And then you know you've got a pretty bad situation.
at Sunday, August 24, 2008 1 comment:

The Complexity of Online Degrees

In the past week....more chatter over online degrees has occurred. Folks are starting to pull out their certificates that they acquired....some who thought they were dealing with a legit university, and discover that the university has no accreditation, thus the $5k they paid....was for nothing.

Jane Killigan is such an example. She went through a college and got a masters degree....with actual classes taken via the internet....only to find out the $5500 she paid.....was worthless. Canyon College came up this week as well....with issues in its program.

There are accreditation programs within the US, which are respected. If they say a small town university is approved....there is no argument.

This problem is rather unusual. Up until the 1950s, no one really cared about this accreditation business and you could run a 1,000 student college in Plano, Texas under some Methodist flag and be a university....no one questioned the professors or the program. There were various colleges in America that were doing a decent job, yet were in the smallest of towns.

When internet arrived....then we started to have universities pop up and claim a status....then offer any kind of degree you wanted. Some actually required real classes, and some just said "pay us the money" and then mailed you the degree.

How many folks are walking around in management positions today with fake degrees? I'd bet over 100,000 in America are in such a dilemma. They probably are checking the facts and scratching their head over how they can slide by and not be caught. If they stay in the same position, they will likely make it. If they apply for a new job and this degree is sitting there to be examined...they've got issues. They've hit the end of the road.

The amusing thing now will be the number of teachers caught with advanced bogus degrees. To get your hefty payraise as a teacher....you need to complete a masters degree....so the pressure was on with a significant number of folks to just finish any kind of degree or show something. I'm suspecting that over the next twelve months.....we might see 50,000 teachers either fired or downgraded to the old salary scale. Once there is a national database of the bogus universities....the heat will be on.

What this all adds up to....is a society with an addiction for a piece of paper to show their status and value. We are advancing this idea of achievement involving educational status, and its probably not a brilliant strategy.
at Sunday, August 24, 2008 1 comment: