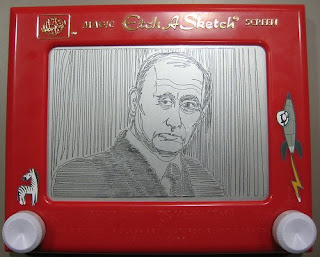 Today, with CNN in full swing, Russian Prime Minister Vladimir Putin has accused the United States of personally orchestrating the conflict in Georgia to benefit its presidential election candidates.

So yeah, Vlad....it was Karl and us in this dastardly-planned episode. For almost eight years, we had been on working on Operation COLD WAR II. This started shortly after GW took office, where we were already planning 9-11, the invasion of Afghanistan, the surge of Ossama, the invasion of Iraq, the eventual capture of Saddam, the first 66 episodes of "Lost", the Dixie Chicks episode, the fall of Hillary Clinton, the downfall of Alex Rodriguez when Madonna entered the picture, the oil bubble, the Yahoo-Microsoft Texas-chainsaw match, the collapse of the Atlanta Braves, Hurricane Katrina, the sinking of New Orleans, global warming, the Nobel prize for Al Gore, downfall and rise of Brittney Spears, the arrest of Paris Hilton, the Hasselhof episode, all of the American Gladiator episodes, the Hulk Hogan episodes, and even the Georgia affair.

It was tough planning. We had to get the Russian mafia, the Russian generals, the Russians drunks, Russian Aeroflot, the Chicago Bears ownership, fourteen Ukrainian hookers in Belarus, and the writers for "Lost" involved. This entire involved at least 14,090 individuals and forty-two planes were involved in moving the right people to the right positions.....including the hiring of 700 Mongolian tribesmen who pretended to be Georgians but really weren't. We also had to buy 30 Bulgarian WW II tanks to use as props as CNN and Fox went deep into the heartland of Georgia to show vast amounts of damage triggered by your forces (who were drunk for the most part with 600 pallets of Jack Daniels booze that we brought in....complements of the Russian military that we contracted out).

Around the clock for the past twelve months, we've been working on this giant episode, in hopes of making it a glorious moment in Russian and American media.

No, Vlad, we don't deny it for a moment. In fact, we've done so well....if it were not for the last season of Battlestar Galactica or the "Lost" season....we'd nominate ourselves for an award or something.

But here's the surprising thing....we aren't done yet. Karl Rove still has fourteen volumes of episodes for us to carry out.....before we reach his glorious climax. So the best has yet to come.
at Thursday, August 28, 2008 No comments:

The commerce department numbers came out today, and they were a true shocker. This government stimulus check that all you poor folks got....helped to charge up the economy by three percent.

After a long pause and reflection....I have a suggestion. Write a stimulus check for $10k for each person, and we could be watching a 30 percent surge on the economy. That would bring tears to Bush's eyes, and probably help the Las Vegas folks make a killing on hotel and slots. In addition...lots of folks would put up pools in the backyard, toss in six window AC units into Mama's house, get that pontoon boat that the husband always dreamed of, or possibly redo the septic tank and put reroof the house.

Course, if the Democrats got involved, they'd demand that ultra-poor got a $50k check and we regular folks just get a $150 check.
at Thursday, August 28, 2008 No comments: 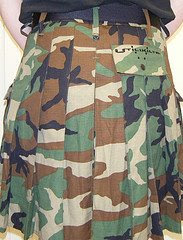 Today, I wandered over to the Ramstein BX, for my monthly haircut (all twelve hairs, more or less). Afterwards, like usual, I waste ten minutes walking around, and walked into the Brit shop....where they featured a BDU kilt. I stood there for a good long 30 seconds admiring it, and quiet frankly....if it had been reasonably priced (like $60), I would have bought the thing and worn it around town. Well...maybe.

But the dimwits wanted $130 and I just stood wondering what fool would possibly pull out $130 to buy this? And then I wondered if the military could possibly bring themselves to use this instead of regular pants? Our bosses are die-hard old fashion types and I'd have doubts that they'd accept a kilt.

So I walked out and all the way back to the office....thought of the kilt and what kindly remarks I would have had in the office....had I pulled out the cash and bought this. Course, as a contractor, BDU color is out, and I'd be quickly tossed into Contractor "hell" for wearing something like this. But it was my daily fantasy, for a few short moments.
at Thursday, August 28, 2008 No comments: