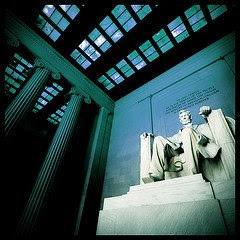 Joe "The Plumber" Wurzelbacher decided to talk today. For a plumber, he held a pretty tidy and professional news conference. Up in Holland, Ohio, folks might be thinking "The Plumber" might be wiser than they thought.

I watched the clips of Joe speaking. The news guy tried to trip Joe up...there for a minute. Then Joe turned....like Micky Mantle with a grin, and began swinging away.

The more Joe spoke...the more he connected with real people. As much as the Katie Courics or Today Show freaks would like to dump on Joe and end this Joe "The Plumber" scheme....it's not working.

If you work hard.....you earn your dream. This commentary that Obama casually threw around....wanting to tax more and just hand out the money to the people below you....isn't likely to sell to the millions of Joe's out there. Across the heartland, these guys put out their own sweat and would readily be willing to share with their family and friends. The idea of redistributing their money to someone outside of that circle...won't sell.

I''m guessing Joe has a legion of friends who are busy viewing his clip and grasping the significance of Joe's American dream. His friends....have the same dream.
at Thursday, October 16, 2008 No comments:

Our Comm NCO's in the office got a call today....the Air Force has decided to go to a six-month at station and six-months deployed schedule. Its a pretty bitter pill for them to accept. The current plan was to deploy for four to six months....then get fifteen months off before the next deployment. That was fair, at least in their minds.

So this new deal has a slight wrinkle....as I sat there doing the math. You get notified you are deploying in 90 days. You spend the next month doing the shooting qualifications, getting the shots, and preparing your personal affairs. Then, if deploying to Iraq or Afghanistan....you got to a 45-day combat class in the states. Then you actually deploy for 179 days or six months.

You return after six months (your new cycle starts that day).....to get a week of in-processing....then two weeks of free time, and then you could take thirty days of leave.

Add up the days that you can actually work at the normal duty station for our organization....and its less than twelve weeks a year. If you count in PT time, PFE schools, special training....then you probably get down to eight weeks of real work you can do for us in a year. Why bother even coming to work?

I didn't say nothing negative to these guys....its their deal, not mine. But if they were ever looking for a reason to vote Obama....the Air Force gave it to them. I'm guessing half the guys with this deal will decide to get out of the Air Force in two to three years. They won't stay in. Their only hope is to have the war end. I'm glad I retired ten years ago.

Apparently, in the pits of the Pentagon....some fool has put this fantastic idea of building a rocket that would shuttle a dozen-odd troops through space to a critical place where they'd fight someone within two hours of warning. These guys are so serious, that they held a two-day conference to discuss the idea. Naturally, alot of officers attended.

The best that folks can say....is that a dozen fully armed "Grunts" would be onboard, with alot of weapons, ammo, and probably enough supplies to get by for two days. Somewhere in the midst of this...I'm guessing that the Air Force is standing there and thinking "pilot". Someone has to control this vehicle....and Army guys can't do it. This is the logic of the Air Force, if you didn't grasp that.

I'm guessing at some point....the Air Force will demand that their guy is the 13th guy onboard, and that only he can fly the vehicle. The Army will smile.....and say they can agree to this, but first there have to be test vehicles built. The Army will build the first shuttle and put Private Snuffy as test subject number one and Skippy the Chimp as test subject number two. What they won't tell the Air Force....is that Skippy is a trained chimp and is being trained to fly the shuttle.

At some point, after the tests are complete.....the Army will let the Air Force know that they actually flew the test vehicles with Skippy the Chimp as the pilot, with no problems. Now, the Air Force will be really screwed.....because the Army has already proven that Chimps can be pilots and the Air Force concept of a REAL pilot is dead on this project. You can imagine the happy Chimpy smile that Skippy will have when they let him know that the Air Force is off the project and now....Skippy is a full-time pilot for the program.

Thats how things work in the real world.....we'll all replaced at some point, and in this case....Skippy the Chimp is quiet adequate.