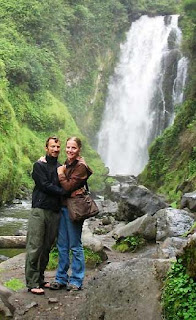 About every six months, you come across a pretty sadly planned trip....and you just shake your head.

So up in Oregon, this couple got engaged....Britt Leis and his gal Leah Koehn. Britt wanted a special engagement period. So the two sold all their belongings and went to Ecuador, for a one-year walk-around period.....to get a life experience.

I've met folks like this before. Once in my period in Panama....I came across a young educated couple who wanted a life experience and were going to spend time in Panama to gain it....at least till the $100k ran out that they started with. The two had no real plan and they really didn't grasp the amount of corruption in Panama or the trouble that you could run into. They had this idea of a jungle paradise...where everyone was friendly. Its just not that way in South America.

Yeah, its really romantic for one of these experiences. I can feel something.....well....it just ain't romance. Its called stupidity but then you can't teach common sense to some folks.

So Leah and Britt went to Ecuador. They blogged along the way. And about two weeks ago....on some beach area....they ran into some bad guys. Britt got knifed about eighteen times. Leah was beaten a bit and raped. Britt has had three surgeries in the last week, and in the last couple of days....got put on medivac and sent to the states. It would appear that he will survive although I'm guessing he has severe damage done to him and may face years of health problems.

All in the name of a life experience. I can stand here and talk till I'm blue in the face....but these folks aren't going to listen. They want a peaceful, quiet place where natives come out and shake their hands.....folks offer up water for weary travelers....maybe even a home-cooked evening meal for someone whose been on the road all day. Its an imaginary place they dream of. They've seen it on National Geographic and think that this stuff exists everywhere and no one would ever bring harm to them.

In six months....another couple will come up with a similar story.....hopefully they live through the experience and can "escape" like this couple. Any fool who wants to wander around.....would be better suited and safer in Provo, Utah....than some beach in Ecuador. Thats the sad truth.

Email ThisBlogThis!Share to TwitterShare to FacebookShare to Pinterest
Labels: ecuador 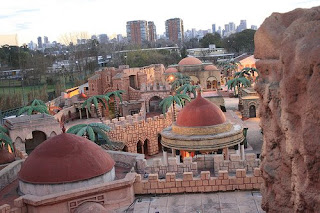 Somewhere out in Wilson county, Tennessee, near Lebanon (the city, of course), is that magnificent effort to build Bible-Land or Bible Park USA or Six Flags over Jesus (depending on which of the locals or political figures you talk to).

This magnificent plan has kinda stumbled in recent weeks because of some chaos across the heartland involving Harvard, Yale, Princeton and Colombia business graduate experts and the American banking sector.

Thank God....literally.....that the developers have a Godly vision in their hands.....because they aren't stopping just because of a credit crunce. They are praying hard and think God will send a bail-out of some type.....and save their vision.

For those of you who aren't familiar with the area in question....its an area just off Interstate 40 in Lebanon. The Jesus boys say the theme park would include highlighting stories from the Old and New Testaments.

Some folks also suggest that there would be high-tech rides (the slamming Jesus dipper, the toss and tip Moses merry-go-round, and the Luke 300-foot slide.

The best numbers here....indicate that 1,800 jobs would be created and the local area would see around $43 million worth of paychecks. And to make those political figures just giggle like 18-year old school girls.....almost $7 million in yearly tax revenue.

Now, a smart fellow would think that bad economic times would be a terrible point to bring this stuff up. But these guys are pumping up the talk and chat.....and they've got the Jesus-vision to make this happen. You gotta market the Bible and Jesus the right way....you've got to have the right fast food, the peppy sugar drinks, and lots of pro-Jesus junk to sell around the park. Heck....some folks might spend $40 on a new Bible or $80 on a oak-carved cross to mount in the living room.

I'm thinking that bail-out money ought to be allocated to these boys. Surely someone has got $40 million to help make this stuff happen. Heck, those folks in Birmingham spent $3.2 billion on a fancy sewer system that was forty percent overpriced. Surely someone has some cash to loan these Jesus-folks and their theme park.
at Saturday, October 25, 2008 No comments:

Up in New York....the governor has his chief aide......a Colombia Law grad (similar to being a Harvard or Yale grad).....Charles O'Byrne who was likely very close to being fired or dismissed. The guy resigned. Apparently.....Charley just didn't pay any federal incomes taxes for 2001 through 2005.

The best we can say here.....this guy, who is quiet educated and intelligent....claims that he suffered from depression and simply dropped opportunities to pay his taxes. Eventually, something must have occurred to remind him....but then it was a public item.

Its curious.....you have a job making $178,500 job as the number one dude to the state governor.....and you forget your taxes. What adds to this interesting story is that he is a marathon runner of sorts, a former priest, and some of his articles that appear in public center around his dislike of the Catholic Church's leanings on homosexuality and celibacy. This is a guy who is running on a daily basis....both in the physical form and the mental form. He isn't accomplishing anything that makes himself comfortable or happy. And these all add up to trigger depression which just plain made him forget about taxes.

Jailtime? Nope, the guy is paying off the IRS guys and they are apparently happy about this. As long as they get their money in the end....life goes on.

The Spiral in the Heartland

For those of you who rely on the big five for your daily news....here's a piece which you haven't seen....or at least until next week. The largest municipal city bankruptcy in the history of America will likely occur in Bama in the next week or two. Yep, my own Birmingham.

Now, how would Birmingham get into this kind of mess? Well....its a curious thing. Those dudes came up in the 1990s, with Harvard leadership (note the university) in the form of Mayor Larry Langford. The county and the city got talked into a $3.2 billion sewer system. From what real sewer experts say...it was quiet a bit more than what the city needed and the costs were pumped up way more than normal. Basically....Larry the Harvard Wonder...did exactly what you'd expect out of any grad...toss money into the wind and just wait for federal help. Its the Harvard way, you know.

This past week...the chief of the county commission said the county could make a $10 million payment on $120 million of obligation warrants if they had to.

They are basically working against a 31 October deadline now....to pay off or restructure $120k of obligation warrants. This past week, the governor had to get involved and actually called up the Fed boys in DC...warning of the consequences and basically asking for BAILOUT (term used for Harvard welfare, for those of you in Bama).

The amusing thing here....is that if they make this pay-off....then comes the next payment due in March of 2009...which just triggers round two. So this current episode really doesn't end if the Feds help a little bit...it just continues on.

The really curious part about this entire deal? There is an offer on the table to the banks and credit organizations of raising the rates that customers are charged...to perk up interest of the financial organizations. This rate increase (figured to be substantial) would make the banker's hearts start to pounding...like when $60 tramp walks in the room in Wal-Mart evening wear.

The local reaction to the sewer rate increase? Well...this has kinda been avoided in discussions in a open forum and folks aren't sure just how much they might be talking about. The minute that folks figure it might be thirty percent, or even fifty percent....there will be a significant number of the minimum wage crowd who basically admit that they can't pay it. Folks cut off from city sewage? Well...its kinda strange and I doubt that they could do this. The courts would try to seize property or sue these folks but I doubt it makes much sense.

Here's the really good part. Across the entire state of Bama...in the 1990s and the past ten years....lots of cites and counties did the sewage upgrade episode. Lots of them borrowed money and built a system that was way beyond their needs...and paid lots more than it was worth. There are towns of 20,000, 10,000 and even 2,000 residents....that have overextended themselves. They aren't $3.2 billion in debt...but they might be $1 billion or $500 million or even $100 million in debt. They all have the same issues...with banking loans and raising rates. They were all taken advantage of, manipulated by Harvard grads and sleazy bankers.