The Future of Security in America? 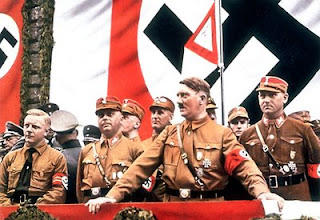 Somewhere in the last few weeks of political promises, Senator Obama came around and made some promise to create a ‘Civilian National Security Force’ that will be "as well funded and as strong as our military".

Most of the media just glazed over the promise and just going (you can't stop and ask for explanations from Presidential candidates of course). I sat there today reading over the comment. Some folks on the internet have pulled this out and made their own comments....so I'll make mine.

Its hard to envision a civilian national security force, unless you meant the border patrol, the FBI and the US Marshall's. But they already exist, and their budget requirements are quiet adequate.....they won't even argue about that.

Could he be talking of the Homeland Security folks and the Immigration folks? No....they exist and function quiet well.

I suspect that he was just tossing stuff to the breeze and hope this is the case....because my only other suspicion is a "Brownshirts" organization....which is the last great civilian national security organization that existed. I can't even put the Homeland Security folks in this ring because they can't control state police or various federal groups which are intentionally kept separate.

Could a Obama presidency recreate a "Brownshirts" organization? The formula would be simple....take the Homeland Security folks....direct national support for state-level cops and police forces....which alot of state and local towns would like because they get fed pay deals for their employees and they are off the hook. The other side of this coin is a massive national security operation which could threaten the core of personal security and democracy.

As much as I have issues with Bush and his efforts to form Homeland Security.....it never went past a point of major operations. Its still just a small headquarters with limited control over its agencies.

How could an Obama administration misuse this new force?

First, lets imagine the full creation of a force very similiar in nature to the US military. You'd likely take the FBI, the state national guards, FEMA, the Marshall's service, DEA and the various state-run police forces under one flag. They would report to some cabinet-level officer who would report to the president.

Abusive? The potential is fairly great. Any number of political games could be played with this organization. Any number of abuses could be committed. I could see a revolving door of hundreds of cases facing the federal government over abuse. Simply the act of monitoring the internet could bring these "brownshirts" into a situation of issues.

Similarities eventually to the Brownshirts? Yes, with much doubt. At the state level....a lot of folks would begin questioning the authority of these guys to operate and their pleasures of arrest. The curious thing is that we already have laws on the books for security and protection of American citizens. It would be humorous to see how more laws or more "troops" would fix the issues at hand.

Finally, the cost issue. To hint like that they would...at the level of the Pentagon....was silly. But to actually suggest that you would fund a totally new organization out of thin air, with ten billion federal tax dollars.....would challenge the economy that exists today....as fragile as it seems.

I'm truly hoping this was just a stressful moment and the guy threw out a bunch of stupid comments. If we are headed toward a Brownshirt period....it'll be an interesting period of American history. For those who don't remember....the Brownshirts eventually the biggest internal problem facing the Hitler machine....they eventually passed by the "enforcer" role and became a serious handicap for the survival of Hitler and his associates. Hitler eventually had to create the Gestapo to bring down the Brownshirts....and then a bloody evening where all the top players of the Brownshirts were either imprisoned or shot.

I Will Bring Change 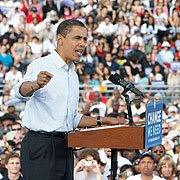 "At this defining moment in history, you can give the country the change we need." So spoke by Senator Obama.

That was the quote there yesterday, out of yesterday's radio address.

There is the touch and feel of something that we all want. Maybe we have that "alcoholic" perception that this change will fit and be the one to finish off the problems we have. Maybe this is the point where bad things are made to go away. Maybe this is where truth and honesty come to Washington DC. Maybe this is where taxes get realistic and we actually keep some money in our hands.

This is so much like the feeling you perceived with the Star Trek movie episode The Final Frontier, where Sybok (Spock's brother) has taken the Enterprise and is on the trail of "God". Everyone eventually reaches a point of believing Sybok and his dream of finding God at the end of the universe. Kirk himself reaches a point of being curious but never quiet believing in such dreams.

So when they step foot on the planet and face the being Sybok believes to be God....there is great moment....where God says he needs the Enterprise to escape this planet. Kirk reaches up with his hand to question why mighty God would need such a vessel....and is knocked to the ground in a bolt of lightning.

Kirk stands back up and then tosses the same question again. The others now realize that mighty God does not stand before them, and the question of exit is now upon their minds.

As I continue to watch this media parade around Obama and the tossing of the "changes to come"....I am like Kirk. I have some doubt. I'd like to believe in something. But something deep inside of me says that this is an illusion at best, and a nightmare at the worst.

So I will sit by and watch these final days as they come and go....wondering Kirk's logic was right in the end.
at Sunday, November 02, 2008 No comments: