Anti-Semitic or A Bit More?

In a recent court episode here in Germany...the court decided that term "anti-Semitism" was forbidden in the written material that heavily criticized those against Israel as "anti-Semitic" in his blog. It was a curious effort by the district court in Cologne. Just the mere use of a word...unsettled the court and earned a legal standing.

So I sat and paused over this use of words.....and pondered the words of George Orwell: “Political language. . . is designed to make lies sound truthful and murder respectable, and to give an appearance of solidity to pure wind.

Then in a moment.....I came realize that one merely needs to invent a new word or phrase for anti-semitic...for example: disliking member of any of a number of peoples of ancient southwestern Asia including the Akkadians, Phoenicians, Hebrews, and Arabs. The minute you do this...the elite dimwit in front of you and the judge will realize you’ve beaten them at their own game. The meanings are all the same...just twenty words instead of one....but now you've used the dictionary and its literal meanings to recapture the sharp edge of written word.

Email ThisBlogThis!Share to TwitterShare to FacebookShare to Pinterest
Labels: anti-semitic

As always, I am thinking and pondering beyond the norm. So today, I woke up and suddenly it came to me. If redistribution of wealth was such a great idea....why not geographic distribution of restaurants? My proposal is quiet simple....restaurants in a region would be mandated to be proportional to the percentage of each ethnic group in population.

I realize that some restaurants might have to pick up and move but this redistribution would fit into the needs of the society, rather than free enterprise....which is the root of evil for all Republicans.

The neat thing about my redistribution plan is that this would be tidy and government funded as each restaurant packed and relocated to a area that desperately needed services in Chinese food or bar-b-q food. This would be like a bail-out fund, just bigger.

To be honest, since I had that idea....I've been coming up every hour with another redistribution plan. I can envision Baptist redistribution plan where we send hardcore Baptists to other locations where there just aren't many (like Maine). I have this idea over redistribution of bald and chubby guys (mostly from Bama), but I can't decide upon the state to dump them into yet. And that idea of redistributing Democrats across the south to help the "red-state" syndrome could only improve the nation....although some California Democrats might hesitate moving to Red Bay, Bama. We could entice them with bail-out bail-out money....which is better than just regular bail-out funds.

Email ThisBlogThis!Share to TwitterShare to FacebookShare to Pinterest
Labels: redistribution

Another Note on the Fairness Doctrine 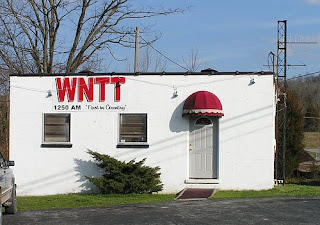 Most folks think that the Fairness Doctrine will return by the middle of 2009. Based on the commenting at various sources and site....its more than likely.

One curious aspect which has not been tossed out into this discussion....is the difference of quantity today versus 1985 when this Fairness Doctrine was dumped by the side of the road.

There were basically three real networks on TV and maybe a dozen networks on radio. To be one of the three "governors" on this board to manage the fairness of statements and comments....it was fairly simple. But then today in 2008....there are over three hundred various television networks out in some format. From AM radio....I'd be guessing well over fifty networks and over 4700 AM stations in America.

What will three mortals accomplish against this type of massive complex....which is totally disconnected? That is the disturbing part of this problem. It would take a totally different staff and complex. I would imagine at least four hundred personnel to monitor complaints and actually conduct audits of stations, networks and individuals.

The threat to ABC, NBC and CBS? This is the curious thing....because once people learn how to mount a complaint....they will show the process to a greater audience via the internet. Instead of forty people complaining about Paul Harvey being pro-gay or anti-New York Yankees.....it'll be fourteen thousand people. And if that many folks made an accusation against Paul Harvey of all people....can the group of governors just smile and pass by Paul Harvey? No....that'll toss every situation into a legal process and require another five hundred lawyers to defends the Fairness Doctrine Commission.

The exit to satellite radio? Yes....watch as almost every single network and show will exit AM radio and finds itself safely on satellite connections. Why even waste a moment of debate or investment of capital....just blast it from miles above the earth and rest assured that night that the Fairness Doctrine won't harm your network or cash flow.

AM radio....prepare. You guys are dying and will need the bailout of bailouts.....to survive and linger in a dying pose before the media and the government. What they could not save....they cannot allow to die....and so a slow death of misery will follow you. So downsize, buy up all the jazz records you can and hope that you can make it with a staff of four guys and a slinky blond named Wendy at the front counter.

The Oprah Winfrey Network? Say it ain't so. So news sources are hinting that there is a discussion out there....about creating a network out of thin air. The 2011 season is the last of the contract for the Oprah Show, and it really appears that she won't extend or sign another with the ABC folks.

You'd take a dash of this and a dash of that....and come up with some some version of BET (Black Entertainment Television), the Food Network, Arts & Entertainment Network, The Lifetime Network, Ovation Network, and the TRIO Network. Basically....something built to be of the better side of life and tell positive stories. You probably won't hear any Rapsters on this channel, or watch a movie on greed.

Success or failure? The fact that the Pro Bass Channel still survives....indicates to me that a OWN channel would survive as well. It might not attract alot of people, and most of us would likely prefer QVC more than OWN....but hey, we still have the option of changing channels.
at Sunday, November 09, 2008 No comments:

Email ThisBlogThis!Share to TwitterShare to FacebookShare to Pinterest
Labels: oprah, OWN 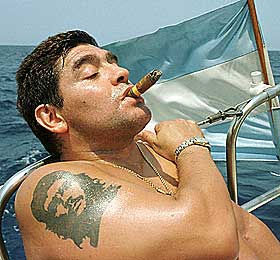 For a Bama dude to discuss soccer, its pretty earth shattering. We aren't supposed to know much except a soccer field looks like a football field, and the ball is round. The sad truth is that I've watched probably around one hundred soccer games in my life and can generally explain how things work.

This week was a rather unusual week in the world of soccer. The folks down in Argentina needed some kind of boost for the Argentine national team....so they reached out and hired up the fabulous Diego Maradona as coach. Well...to be honest, in the mid 1980s....he was fabulous and probably one of the top three players of the entire decade. By when he aged and reached the point of not being able to deliver...he slipped to a depth that you would prefer not to discuss. The guy basically lost his great fortune....got into booze and drugs....and acted more like a nutcase than a professional soccer player.

By 2004, he had major health issues and some folks thought he would not survive the year. Somehow, he survived on....and even came to Germany for the 2006 World Cup....although looking more like a crazed Argentine fan than a world class soccer player.

I'd like to see a miracle and maybe this event actually work out. It'd make a great movie. But the reality is....if lucky....he lasts 100 days before being fired or being found as a overdose case. Thats the sad part about this story....there isn't a weepy-eyed story to tell, except that he likely failed in the end.

Cooks in a Kitchen

In life, there is generally a absolute number or limit....of cooks that you can allow into the kitchen. Grandma might say three. Uncle Karl might say six. Your crazed aunt might say zero and just order out. But there is a limit because they start to stomp over each other...tossing sugar all around....criticizing each other....and then getting into hostile fits because you just can't make apple pie without American-grown apples.

This past week......we ended up finding out that the Obama team has now incorporated a 17-member economic adviser forum....to guide and inform the president-elect.

On the positive side is Warren Buffett. Even I'll admit that he is the Muhammad Ali of his time in finance...and whatever he says...is 95 percent true. But then, we have sixteen others. The number of Harvard, Yale, Princeton, and Colombia financial wizards (who helped to create the crisis)? Well...its more than just one on the group.

Here is the amusing part of this episode. When you lock seventeen economic folks into a room....you usually don't get anything worth discussing at the dinner table and half the talk is economic theory (thus not yet proven). Its hard to say if Obama really expects anything out of these guys or this was just an attempt to look smart by bringing in seventeen "experts" on one subject. In the media's eyes...its pure gold. Surely something must come out of this?

In the end....like cooks in a kitchen....seventeen guys will end up giving three or four general statements which kinda point in one direction but its all pretty generic and you could have gotten this from a first year accounting student at Iowa State. The agreement amongst the folks? If you can find eight out of the seventeen on agreement on any topic....you might be really lucky.

The positive I see out of this....is that the seventeen folks need to be at a off-site location....maybe some ski resort in Idaho...sipping expensive whiskey off the government credit card they are issued. I'd figure at least two weeks of discussion...some T-bone steaks....a few shrimp....and maybe watching old episodes of Cagney and Lacey in between the meetings. Obama gets some pictures taken with the folks and maybe gives them each a presidential pen. And if they are really lucky....those Swedish folks who do the Nobel economic awards...will put them up next year. It'd be mighty fine to have seventeen of our guys win the Nobel Prize for Economics....and they'd get another free trip to drink even more expensive Swedish whiskey.

Just another day in small town America, and living the American dream.