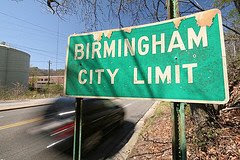 About a week ago, the Feds finally came for the Birmingham mayor, Larry Langford. Folks in Birmingham, around the state, and even nationally....don't have much of a positive mind over Larry. Larry is now facing 101 counts of bribery and corruption, including charges of accepting expensive jewelry in return for public favors.

The general feeling is that Larry is a bogus political figure, with no real expertise in anything...even acting like a mayor. Larry had big intentions of running for governor in the next election...but I think this may have cooled off that idea.

Birmingham is a special place...where most of you would never move to. There is a north-south and east-west interstate to travels through Birmingham. You would think of commerce and lots of business chances in this town...but what you find is mostly crime, drugs, and a behavior that anyone in a position of authority...is corrupt. Larry is simply at the top of this chain...there are hundreds of other folks who rank behind him.

Kylie Whitmire wrote a great little piece in the Birmingham Weekly...speaking of Larry's ability to generate public support. There was a meeting two years ago in Nashville....where diversity was the chief topic of discussion. Kylie's story: One of the panel discussions focused on “diversity.” Despite the billing, there was no Asian panelist, no Latino, no gay. Instead, there were five black business leaders talking a lot about getting into restricted country clubs. One panelist, Tennessee commissioner of financial institutions Kevin Lavender, called Birmingham the most racist city in the country. He based his assessment on how he was treated here by a gas station attendant and his experience as a lunch guest at the Birmingham Country Club.

“I don’t care for your city because of those experiences that I’ve had in the last four or five years in Birmingham,” Lavender said.

Only one member of the Birmingham delegation defended the city. Then-County Commission President Langford blasted Lavender and the panelists. He invited them to visit Birmingham, because the city they described was not the city Langford knew, he said.

This is the kind of guy that Larry is...he generates public sentiment....but he delivers it in a tidy package with a price attached. You are basically funding Larry and his friends...to make yourself feel good. Its the state of politics in Birmingham today.

The charges and Larry? Well....there is hope here. If Larry can simply show that Karl Rove was in the state and possibly could have manipulated the charges....then everything gets dropped. This is the current trend of fighting charges on corruption by Democratic leaders in Bama. Its a great trend....because Karl is the most evil man on the face of the earth.

Larry's best chance now? Beg off on some charges as being guilty and expect a 20-year sentence....then hope that at the end of the Obama period....either four years or eight....he can pardon Larry.

A movie on Larry? Actually, I wouldn't mind seeing such a movie. But folks would really be disheartened over his false words and fake promises. It might bring Birmingham back to reality....but then there'd be another Larry out there....trying repeat the magic and things would go back to normal.

Don't Have a Cow

I haven't quiet finished my pondering over the EPA tax idea for cows...as I blogged yesterday. For those who haven't paid attention...the EPA is considering this idea of taxing every major farm and cattle ranch in America....to include hogs as well...making a yearly tax on the cattle to halt the terrible gases that cattle release. They figure that the farmers will pay the tax and the public will pay the farmers. So far, this is in discussion stage only.

So I've pondered this and how a scenario would develop when the tax finally goes into place (if it did).

Farmer Frank, Rancher Randy, and Butcher Bill...get into their cars and drive up to DC...to personally meet with Democratic senators and representatives....to discuss a bailout....around $80 billion this year...and another $80 billion next year...for farmers, ranchers, and butchers not to accomplish any beef or pork production in America. They are all bankrupt over the EPA tax.

The senators and representatives will wink over and over at each other and the cameras....and then agree to bailout these folks too. At this point, the government will swoop in and virtually own every cow in America. So folks will have undeclared cows and hidden cows....trying to keep the government out of their personal business....but to get the bailout money....you will have to declare your cow and get in on the bailout funds.

A Cow Czar will be appointed by President Obama....who will tour America....coast to coast...meeting his cows and discussing cow bailouts with everyone who will listen. The Czar? He’s an Indian dude who considers cows holy.

A year or two into this massive cow policy.....nearing the end of his presidency....President Obama is given the Nobel Peace Prize...for his cow policy. Millions cheer from Sweden to Tonga. President Obama will be referred to as the proud owner of hundreds of millions of cattle.

Eventually....a couple of farmers from Alabama stand up and offer up some illegal beef, which is sold via El Salvadoran gangs on the streets of America. The illegal beef, with no taxation on it...is sold like “mary-j-u-wanna”, and then a commerical is produced with one dude saying to another....”Dude, got some beef?”

A special task force of law enforcement folks will be sent to Bama....to halt the illegal beef sales and bring the terrible criminals to jail. Cattle gangs roam neighborhoods through Dallas, Nashville and Chicago....selling tons of illegal beef. Roadblocks are set up and people are sent off to special prisons.

Eventually....someone will make a movie over "free cows" and how it was before the government ownership situation occurred. A couple of guys will start an effort to have a independent cattle process....with the government very uneasy about allowing competition on their cattle market.

Then one day.....some senator will slip in a bill which forbids the EPA from gathering any tax. It'll accidentally pass by a score of 99-1 and suddenly all cows in America will be forced back onto the farmers and cattlemen. They'll demand government bailout money.....to take the cows back....which the democrats proudly do. After twenty years....no one remembers anything about the brief period of government cattle ownership.

For the last year or two...I have blogged a couple of times about the state of newspapers across America. This week....we came to learn that thirty significant newspapers in the US are up for sale....and buyers simply don't exist. Even with all of the downsizing and budget games that they've played....it simply hasn't worked.

I've detailed the reasons for this: fewer folks putting ads in the papers, competition from the Internet, the national budget situation, and simply damn-poor management of papers. Adding to their misery....they often wanted to be a political voice in the local area....siding with one particular side....which angered the opposition and triggered an issue with subscriptions.

The latest paper up for sale? One of my favorite papers when I was in Denver for five months in 1981....the Rocky Mountain News. The ownership has finally come around to believing that the paper simply won't pay a fair value....and they'll be lucky to find any owner, period.

2009? Well...its unlikely to improve any of these situations. Its amusing that they aren't running off to congress to ask for bailout....although I suspect somewhere in the spring of 2009...congress may very well step in and offer some funding to keep these folks going.

The interesting thing is that as you cut positions and trim back on the payroll...where do newspaper people go and find employment? The big stack of money that Obama talks about...is for infrastructure issues....building bridges, roads and buildings. None of these journalists will be helped by this massive amount of public works money. I suspect that many of these college-graduates will find themselves selling lawn mowers for Home Depot or doing short-order cook work for International House of Pancakes. It says alot about the state of the things in America today.