Greece and Its Riots 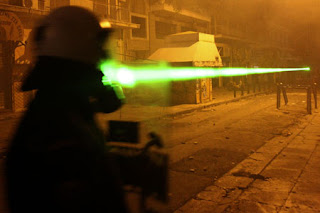 For the last two weeks....over in Greece, there has been a continual student riot episode going on. Its been two decades since most folks have seen stuff like this. The curious thing is that almost every night....hundreds to thousands of students....from 14-year old kids to college-level kids....have been out on the streets engaged in riots.

The key point occurred about ten days ago when some young guy was killed by the cops out on the streets. That kinda pushed up the riots to a maximum level.

So last night, the riots continued on, and the punks arrived with laser pointers....carrying this entire episode to a new level. The government is greatly dismayed over the entire affair...but can't get anything to shift into a quieter period.

So let me offer some analysis here.

When you look at the "timing" and "joint-efforts" in various cities....its a very coordinated effort. Its not something that grows up in one town and peaks three days later. Its part of an agenda. If I'm disturbing the government in suggesting this....perhaps the Greek government ought to start looking at the opposition parties and listen in to what phone chats are going on with the students.

The laser pointers? I'd suggest a couple of folks start targeting the "pointer-dudes" and simply put them down on the ground. You can't allow them to continue their little "game".

The agenda here? The punks are being used, by a political group. These kids may not grasp it, but every single act is being called and planned out by a political party head.

The shooting death of the one student? I would have some minor doubt that he was ever shot by the cops. Its more likely he was a "offering" to ensure the riots went up a degree or two. Shot by the political players? I'm only guessing and haven't read enough to say one way or the other.....which bothers me about this entire game.

Only my two cents of observation....but its sad that a political party uses a bunch of students.....to bring down a government.
at Tuesday, December 16, 2008 No comments: