How Cavemen Came to an End 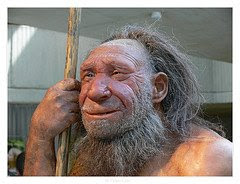 This week....a couple of smart guys took analysis of DNA to a new level. They basically took DNA from Buddy, a Neanderthal dude who had been dead for a pretty long, long time.....and demonstrated the interesting differences with modern relatives of his. The key difference? Buddy's body knew how to produce alot of excess heat.

Buddy likely utilized this heat ability to go out into the cold and hunt daily. His family probably survived on for thousands of years.....because of the ability to take energy and generate more than enough heat to make it in a cold world. If you consider Buddy's diet....high in meat products....Buddy turned everything into useful energy.

But then one day.....warming arrived to this earth.....and Buddy's body didn't alter itself. Buddy was still generating heat....when the summer heat of 90 degrees came. Buddy began to face dehydration and problems when hunting in the summer months. Buddy likely sought out the colder environments and found them providing some relief, but the hotter months still limited his abilities.

So around 24,000 years ago....Buddy and his relatives started to die out. They couldn't keep up with the reality of warming weather. Buddy died because his body failed him. And for some reason, he couldn't evolve into a survivable species. As much as Darwin's theory ought to work....in this case.....it didn't.

Its a strange thing...when you'd think that evolution would kick in...it didn't. Darwin's theory has lots of supporters and a significant opposition. Every rule in the book would indicate that Buddy should have gone to a different diet and eventually had a evolutionally change...but he didn't.
at Tuesday, December 23, 2008 No comments:

For those who don't follow the woes of us associated with the US military in Germany.....there was an amusing event on Saturday.

Most GI's and normal civilian workers (not me) have been forced to accept a gas ration credit card now. Our BX folks, who run the program....told us over and over that the Germans demanded a new and more accurate program. So far, no German has raised their hand to say they asked for this mess.

Last Friday....a minor clerk in the BX empire was messing with the main computer program and set the price per gallong.....although he though it was liters he was doing. So he sat the price between $7.68 to $12.52 per gallon. I realize you are laughing a bit right now.....but on Saturday....the folks who stopped at ESSO stations off base.....found this fantastic screw-job waiting for them. The guys who read their print-out....went ballastic, but the Esso guys couldn't say a word or fix anything.

By Sunday, this had turned into a major complaint mess.

So today, the Stars and Stripes printed the story and admitted that the AAFES folks associated with the BX....had screwed up big-time and were trying to fix all of Saturday's problems.

So far in the last three months....there have been countless mistakes and problems with this card system....which none of the customers appreciate. Some folks would like for EUCOM to fire AAFES and just give the job to a third party....and possibly return to the old coupon way of doing business. AAFES says it'll fix all the problems and people will eventually be happy with this. For some reason, I don't believe them. The nice thing about me being able to really crap all over AAFES in this blog....is that I can't buy my damn gas from them....I buy from the Germans....at $6.50 a gallon anyway.
at Tuesday, December 23, 2008 No comments:

Somewhere on CNN today...they had a political poll of some variety where they wanted to report that 23 percent of the US public rate VP Cheney as the worst VP ever. Forty-one percent added that he was merely a poor VP.

What CNN didn't ask....which why I regularly rate them as the best high school news reporting service in America....can one hundred Americans name more than two VP's other than VP Cheney?

If I found a hundred Americans over 18 on the street and asked to name at least two other VP's in American history.....ninety percent would be unable to do it. Five percent would be able to name two and only two VP's.....and maybe two percent might be able to name more than two guys. The 100th guy? He would declare himself a illegal alien in the country and ask if he could vote if you gave him the chance to.

CNN? Grow up....mature....become a real first class news reporting organization instead of a bogus high-school news group with no depth or ability to report real news. If your key point is to "generate" news.....how about asking how many people think CNN is capable of covering a major event or chaos better than Fox? Thats not the kind of poll CNN wants to attempt.....because they know the answer already.
at Tuesday, December 23, 2008 No comments: