The news boys have been busy this week....trying to cover Obama in Hawaii....and somewhere in the middle of it....was CNN's Ed Henry. Ed was on the beachfront.....in th midst of white sand when he made an observation: "No offense to the people of Crawford, Texas, but taking the presidential retreat from Crawford to Honolulu is change anyone can believe in."

I sat there and paused over this statement....thinking of how eight years of the Obama administration would be for the news guys.....traveling back and forth to Hawaii.....and thinking how they would become accustomed to this "epic". Its kinda like going on a special holiday and sipping lots of booze all day long. Sooner or later....you lose your prospective. Its not a news event anymore....its a stage front.

Will the shier move from Crawford to the white sandy beaches of Hawaii shift world opinion? Thats the curious thing. Just because a news guy is happy, half-drunk, and staying in a 4-star hotel in Hawaii...would he put a more positive spin on a presidential mess? Thats the question I can't answer....and to be honest, I don't want to answer it.
at Friday, December 26, 2008 No comments:

One of Those Days 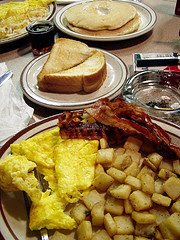 There are about a dozen days a year, that I wake up and I'd really like to get in my car and drive to a Dennys for breakfast.

I've been here in Germany since 1993 and there are a number of things that I've come to miss greatly. Dennys....is one of those things.

I've made around a dozen trips back to the US over the period I've been in Germany, and maybe gone to Dennys three or four times.

I'm a early morning guy. I can wake up at 5:30, and lay there with a thousand things on my mind....and really want to move on with my day. I'd like to just take a quick shower, jump in the car and settle down at a Dennys for a big plate of greasy food. I realize its pretty bad for me and its quiet unhealthy these days for me to take a whole plate of greasy food like this. But its the temptation that exists in my mind that drives this "fantasy" (I realize most of you would prefer to think about hot women with stockings and heels on....but I'm thinking on a different system).

There is a feeling of satisfaction when I'd done. I settle there at the table....with a cup of coffee and a paper....and waste 30 minutes just reading my two newspapers. I'll tip the gal, and then get into the car feeling completely satisfied. Its a "Denny's feeling"....kinda like watching a musical or a opera....but a little bit different.

So this morning, I woke up with this Denny's feeling.....and could not solve it. Other than some burnt toast....I simply accepted this limitation in life. There's hardly a week that goes by now....that I don't think about this magnet pulling , me back to the US. Denny's is just one of a thousand magnets....pulling on me.

Where the Heartland Begins and Ends 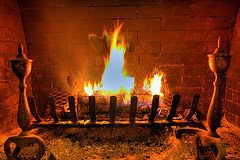 There is this border in America that comes and goes, establishing the heartland and "otherland".

The heartland weeps over young lives wasted and love lost.

The heartland cries over pain, sorrow and woes.

The heartland doesn't advertise much of its suffering or its losses.

The heartland reaches out to the poor, the sick, and the unfortunate.

The heartland sips ice tea on the porch and remembers days long gone.

The heartland puts up monuments and memories of heroes and stoic men and women.

The heartland bleeds...it has cuts and scars to show for its efforts.

The heartland scatters the ashes of human history...in a way that we lest forget the history or the people involved.

The heartland has maps to note where it lays....but there are no customs points to forbid entry.

The heartland has no problem that can't be solved or remedied.

So somewhere in the midst of darkness tonight...as snow falls and truckers pull rigs across America....where temptation settles in upon our woeful hearts....and a fire burns softly in a fireplace...our Heartland lives.