A Once Proud Paper, Now a Dinosaur 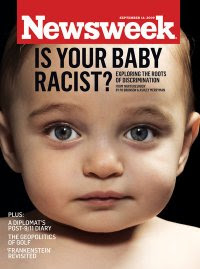 As most of you know....I won't buy Time or Newsweek anymore. I consider both to be third-rate journalism with news that's over seven days old. Neither has contributed any worthwhile news journalism in at least five years. Both are dinosaurs waiting for the meteor.

So this week....complements of the internet....I got a glimpse of the newest issue of Newsweek. It's a piece written seriously, but from the thirty lines of the article that I've read....it's barely passing as news and mostly an editorial of questionable value.

The title? Is your Baby Racist?

Yes, just seeing the cover on the screen....I started laughing. The thirty line description of the article? It didn't help. I went to seven reviews of the article. They were lucky to get two folks with positive comments....but the rest were pretty critical of the writing, the facts, and the flair shown for a editorial being headline news.

As one one wrote commentary on the Newsweek article: "Racial indoctrination of young children, as endorsed by the Newsweek article, is abusive and socially destructive". I couldn't agree more. So it's another mighty swing by a news pretender magazine that is failing as each week goes by. Fortunately, they've let go of most of the reporters....and just relying on a small cadre of guys willing to write editorial pieces...rather than real news.
at Sunday, September 13, 2009