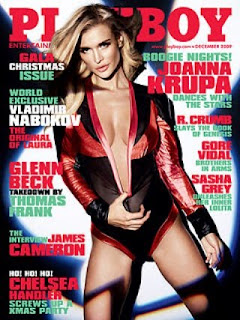 In the next week or two....the December 2009 issue of Playboy will come out. The key article? They've done an entire article on taking down Fox News and an "honest" survey of Glenn Beck....to mention every single fault...but less of any positive things the guy may have done.

To be honest, I haven't touched a Playboy magazine since January of 1998...the period of my deployment to Turkey...living in tent city....and the military tradition of guys buying magazines for everybody around the tent to read.

For that brief period where I might have read three or four Playboy magazines...I kept wondering why I ever read this in my younger years at 18 or 19 years old. The gentlemanly fashion....the style of living in LA....the technical garbage on stereo selection....and the 1-star interviews of the publication....were a joke.

I remember a serious discussion that erupted at my old TV room at Rhein Main Air Base in 1979...where four guys sat there....three in mostly negative view of the publication. I was the sole neutral guy...just voicing the idea that it was a gentlemen's magazine. I was quietly put down and assured that it was for wussy guys with no real appeal to real women.

I paused here to ask my learned friends for a description of "real women", and was assured that the description mostly fits a big-boobed gals, who wore tube tops, uttered mostly four-letter words, drink beer from a bottle, knew twenty rules about professional football, never listened to opera or classical music, and could tell a good whiskey from a cheap whiskey.

They urged me to lay down the Playboy magazine and come to the dark side....mostly Hustler or just hanging out on the third floor "C-wing" with the hotties who resided there. I questioned their logic. Shouldn't a guy be the cool Playboy type? Shouldn't a gal appreciate a gentleman who uses the right colors of clothing, listens to jazz and knows how to make amusing Italian dishes with shrimp? Their response was simple....what kind of woman adores a guy like that?

I became a lesser gentleman of sorts....reading less and less Playboy from that point on. By age 30, I probably read one issue a year and by age thirty-five had switched to more informed reading vehicles.

Today? Playboy is dying. It is a publication that is barely surviving today. This article? It'll be read by maybe 250,000 readers at the most. How many are Republicans who will dump their subscription? Probably thirty percent.