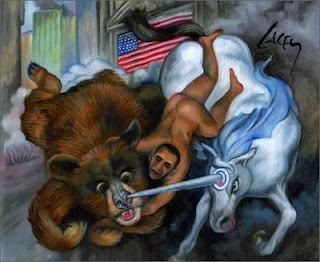 Being from Bama, I'm not supposed to critique art....some kind of state law, I think.

I was waltzing around the web today, and saw this work of art, and found myself staring it for a while, pondering. Frankly, the art critic in me, suddenly came out.

I realize the artist here....had some kind of twitch or was a bit disturbed....maybe even had a bit too much to drink on a Friday night. I'd like to avoid upsetting some artist gal who might dump a ton of stuff on me.....accusing me of being deficient and without any art knowledge. Frankly, I'll do her the favor and admit this problem....here and now.

So I have three interpretations here. The first...as the everlasting Obama has ridden the unicorn up to the mighty junction of the city....a grizzly bear (like meaning Governor Palin of Alaska) has tipped over the unny, and the everlasting Obama must wrestle the grizzly on the main street.

The second interpretation? The artist may have dumped the donkey symbol and let the unicorn represent the new democratic party.....while the grizzly represents the new republican party, with some Obama dude mostly undressed just hanging on for his life as they fight it out.

The third and final interpretation? Obama is fighting imaginary characters.....in a imaginary land....with the imaginary media viewing this....and he'll wake up in a minute to find it was all just a dream.

There is a reason why God didn't want me as the New York Times art dimwit. I couldn't have drunk enough whiskey to come up with puffy art criticisms. Its hard enough to criticize the Braves....but art?
at Thursday, January 15, 2009 1 comment: