View Larger Map
The Recovery Package, which we've all come to love over the past week....has been broken up into pieces now....and we can pretty much see every part of it.

I looked for my hometown....Florence, Bama....and sure enough, they got into the deal. So I looked over this one and only request...$4.5 million.

Its an amusing project. Florence borders the Tennessee River and has three bridges for folks to cross. To be honest, one is the dam bridge and I wouldn't recommend anyone use this damn bridge (two laner). The other two easily handle all the traffic that you could possibly dream up.

Well...some folks, and I'm guessing in the political know of things....came this idea which they haven't chatted much about in public there in Florence. Over on the western end of Florence....is what we'd refer to as the "project area", where its high density black neighborhoods.

Someone cooked up a terrifc scheme where a bridge on the far west side of town could be built. Somewhere along the College Street area. The draw to this idea...selling to the folks at this end of town and the Obama team...is that this bridge would connect with the Sheffield folks on the other side of the river.

By building such a bridge, using their public dream....this would bring in stimulus to this end of town and help bring jobs to College Street occupants. Naturally, these guys think this is neat and would help them.

Total jobs involved? Fifty....and this is being honest. It'd take two years to build this bridge, and I'm guessing it will overrun its cost by $1.5 million.

Here's the reality of the dream. Sheffield isn't exactly a booming capital. There is literally nothing that businesses would gain out of this type of construction over the next twenty years. But then, we aren't looking at the proper prospective. By the time this project is done...the city of Florence and its real estate barons (guys who buy cheap property to gain value)....will begin to buy up property and move the locals out of their low-income areas. Various tricks will be used in getting this gimmick to work...all legal of course. The guys from College Street? They won't grasp the whole plan until its done. In the end...I'm simply guessing, but half of what locals know as the College Street crowd...will be gone.

Now maybe this is the ultimate game...simply forcing low-income housing to disappear. Maybe this is positive in some manner. But to sit here and call this bridge construction...of $4.5 million...stimulus, and hope to bring America back into good economic times? I'll need alot of Jacky D's to make me that drunk and acceptable.

For those curious about their own states? Go to this site.
at Sunday, February 01, 2009 No comments:

It will bring dynamic change to America.

I went back to the advertisement from the US government. "These programs are designed to help producers develop new profitable farming practices and increase their farm or ranch income," says Mr. Vilsack. Then he adds: "President Obama has pledged to ensure that government is inclusive and USDA is committed to that pledge and to opportunities that support a diverse population of producers who might not otherwise seek our support."

When you read through the whole announcement....it reads like some community organizer effort....on farmers and ranchers. This bullet was part of the announcement: "This competitive grants program is open to institutions of higher education and community-based non-profit organizations that provide capacity-building training and assistance to local farmers and ranchers. A socially disadvantaged farmer or rancher is one of a group whose members have been subjected to racial or ethnic prejudice without regard to their individual qualities".

So I pulled out the list of universities that they handed the $6 million to. This became interesting in nature.

I started with the North-South Institute. It wasn't something I readily recognized. Amusingly enough, its based out of Ottawa, Canada...so we are giving the money to a foreign entity. Then you go and check out their website: "dedicated to eradicating global poverty and enhancing social justice through research which promotes international cooperation, democratic governance, and conflict prevention." The chief function of the North-South Institute? Basically, they are a bunch of talking heads...a think tank....and they mostly go around chatting about things. They are a media-magnet of sorts....giving "expert-chat" whenever some CNN guy needs "chair-dude" to entertain its crowds. The $299k? I'm guessing it'll pay for some new modular furniture, some computer upgrades, some conference trips at 5-star hotels, and a fresh batch of donuts every Thursday.

The Mvskoke Food Sovereignty Initiative? Basically an American Indian group out of Oklahoma. Most of their efforts go to old-fashion centuries-old Indian farming. They carved out $265k. They actually do classes...so maybe this might be wisely spent...maybe.

Alabama A&M? Frankly, in Bama, its taken as a joke. Its where you go with a "C" average in high school, and you know you can get through four years and graduate with a degree. No one takes your degree serious, and most regard the professors there as "minor-league" (not my term, its from the locals). My guess is that a couple of professionals in the Ag department will get summer projects with a nice check attached, and they simply drive around and have chats with local farmers. Naturally, they will be looking for socially disadvantaged farmers, and find that most don't really want to associate with the professor from A&M.

Tuskegee University? They have a Ag department and its got some history behind it. A major program? No. They probably might find some productive ways of spending their $300k.

University of Alaska Ag department? Well, I checked, and it does exist. But its listed as the high-latitude Ag department. How much agriculture occurs in Alaska? They have some milk and egg production, wheat and some garden type farming.

Langston? Its a small black university with a Ag department in Oklahoma. Their biggest recent note in the media? For a year, they had Chad Ocho Cinco, a noted wide receiver for the Bengals....although Chad only spent a year there...never even playing football there, and then transferred over to Santa Monica University, California.

So what can I say....the $6 million got chopped up very finely, and mostly unknown or small colleges ended up with $300k in their hands. These non-educational groups? Well...they were simply lucky to be grouped into this mess so that the public would not notice them. Will any of this matter? I'm thinking the one thing that these professors and grad students will accomplish...is teach all of these socially disadvantaged farmers how to fill out forms, and ask for more grants and handouts. Maybe that's a positive...it takes a college educated dude to understand these 40-page government forms....and farmer will have that dude there to help them.

So this $6 million deal...will likely just be the beginning. As socially disadvantaged farmers learn how to "grant"....they will get more money and work less. Eventually, they will all be happy socially disadvantaged farmers....and as my dad described elitist farmers....these are the guys who tend to empty fields and collect checks from the government to produce empty fields. Man, what a great country.
at Sunday, February 01, 2009 No comments:

A Moment of Common Sense 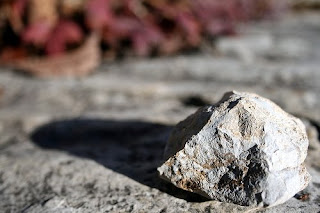 I saw this over at a science site today, and I thought it was noteworthy to keep. Sometimes, simplicity is worth remembering.
at Sunday, February 01, 2009 No comments: 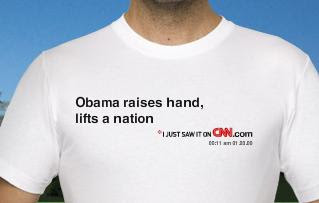 CNN has crossed that point.

This week, on their internal sales unit, CNN put up Obama t-shirts.

The slogans are nifty:

Wrong? Yeah, CNN sells more than t-shirts....its selling its image and its journalist soul. Would they have ever done this with Reagan or Bush? No. Thats the humorous part of this. What happens in eight years when the shift occurs back to the Republicans? Will they offer a Palin t-shirt? No, I seriously doubt it.

So, if you've got $15....you will get a cheap Haitian-made cotton t-shirt, with some CNN-Obama slogan...and you can wear it whenever Anderson Cooper comes on the air. My suggestion would be to open a bottle of Jack Daniels and have a shot glass handy. On varying nights, you play the "change" game where you do a shot each time someone says "change". I wouldn't do it everynight, because then you'd be an alcoholic.
at Sunday, February 01, 2009 No comments: 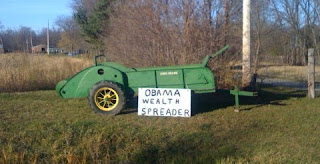 My dad had one of these on the farm, although his was a dull red and he referred to it as a "manure spreader". This picture was taken up in the far north....on a farm in Shafer, Minn. I'm pretty these guys up there have a fair sense of humor.
at Sunday, February 01, 2009 No comments: