No State Fair in Michigan?

No state fair in Michigan? Say it ain't so. But economic times are terrible and the state is in deep crisis.

This week, even Republican leadership came out.....to say they think they may have to drastically cut funding.

What I found curious about this....and I've only been to two state fairs in my life....is how a state pays a vast sum to run the fair.

I sat there and clearly remember paying a hefty fee of $5 to park my car, and another dollar or two to enter the fairgrounds. In my mind, I can't understand how any state contributes a huge amount of money to the state fair. Course, maybe they are paying off mafia guys, or local political figures.

This doesn't make much sense to me. The local reaction? Terribly upset. Some folks think they can still throw a fair, just not as huge.

The fairgrounds director? Well...he is hinting that a school charter group wants to buy the grounds.

I will say this...if the Michigan state fair dissolves.....then Michigan itself is sliding toward a position where they are worse off than any other state. No one wants to go to Detroit today....and several other cities are getting bad reputations as well. This might indicate a dismal future for Michigan.
at Thursday, February 05, 2009 No comments:

Irreversible recession? Was that what President Obama wrote in editorial piece yesterday? My goodness. Such strong words?

Yes, if this stimulus package is not done quickly....it will be irreversible.

I sat there....pausing over this statement. It bothered me. It is a threat directed to the Republicans to stop stalling....just pass the stupid bill and even if half of the money is wasted....the mental affect will save America.

This is the leadership of the President's office saying this. If his office had actually wrote the stimulus package....maybe he could vouch for it....but then, they didn't. Neither did the vast number of Democratic representatives in DC. This was a very tight operation done by Nancy Pelosi and a very small number of people.

You could go and ask the President about twenty different things in the bill....and if lucky, he might be able to explain one of these in detail. The rest? He can't explain in any rhyme or reason. This is the sad part of this entire story. He is vouching for a package of zero value in his own mind.

Everyday, the percentage of Americans buying into the stimulus package is dropping....roughly two points a day. It is now less than 50 percent in favor....I checked this morning. By Monday, the original package will have less than 40 percent in favor....and the President will be chocking on speeches to the public....with no real appeal. He will have lost his first real battle with the public and the media.

Based on comments and perceptions....I suspect that a pretty clear alternate will be pulled out by Monday, with enough Democrats and Republicans ready to sign off. I doubt seriously that it goes over $750 billion. I also think that home loans, and real construction will take the bulk of this funding. The $350 million for birth control programs? You guys can forget about that deal....if lucky, you might get $20 million.

The lesson here? The public appeal of the President.....isn't quiet as hefty or sure as folks thought it was. He may have a 70 percent approval rating....but for stupid ideas...its still forty percent support. His miscalculation over the senate and its power.....is something to be amazed about. He spent several years there, and should have picked up a good bit of knowledge and a number of friends. I suspect that he built zero friendships in the Senate....and this has come back to haunt him.

So finally, my reserved commenting over the term "irreversible". Don't use it....unless you really know what you are talking about. Irreversible recession? To me, it means forever and eternal....and that was pretty far off the course. A recession can be beat....if you do your homework and have patience....and no....it doesn't take eight years. You may like to project a program like the 1930's "New Deal", but this isn't the "New Deal" and we are a bit wiser than we were in 1932.
at Thursday, February 05, 2009 1 comment:

There were two real comments which probably were amusing in nature.

First, a number of folks spoke about the old regime forcing them to head off to terrible, terrible Iraq for a tour at the embassy there. The state department was going to identify people who hadn't pulled tours in a long time, and literally force them to go or else get out.

Hillary stood up quickly to clarify this situation. Basically.....we are going to offer hefty and outstanding bonuses for folks to take these jobs. It'll end up being an amount that people will eagerly volunteer to go....to get this bonus. I doubt very seriously if the people in the crowd were happy about this offer.

What would it take to guarantee volunteers? For a year? I'm guessing $75k on top of their yearly salary with the 35 percent combat allowance and the other 30 percent remote allowance. A guy could be talking about $200k for twelve months there in this case (GS-13 scenario). She has a point here....people would have a three-year mortgage payment in their hands upon return. They would have a huge chunk of money to toss into a retirement fund. They would likely to something like this for $75k.

Are the whiners happy about something like this? I suspect not. The guys who don't go.....will watch guys return and buy new cars and new houses. They will be upset about the uneven lifestyle here.....volunteering for something and getting paid a fair sum....simply isn't fair.....you know.

Hillary then came to topic number two. She is terribly terribly upset over Blackwater and their freelance operatives who really stain the State Departments perfect look. Yes, its terrible, and she wants them gone as soon as possible. We cannot conduct business.....with a situation like this.

As the questions came from the audience......someone naturally asked who would protect the poor idiots who came to Baghdad to work for the State Department if Blackwater left? Hillary said that things would continue with Blackwater as their protectors.

You got it. Its terrible, and we hate Blackwater.....but frankly, they protect down to the bottom line, and Hillary is not about to dump them....to find a bunch of senators asking why an attack occurred and twenty state department folks are dead.

Then Hillary summed up her happiness with the new job.....letting everyone know that she's happy to be back with her Blackberry (since the president fixed his issue).

The Russians are happy about this Blackberry issue being fixed as well. Like most folks, they fully understand that friends and Hillary-supporters are continuing their daily emails to Hillary....getting their email funneled into a email bucket, and then rerouted to her secure Blackberry. So eventually, a trail will be found....and lead to the secure Blackberry.....and then the data virus of some type will ensure her comments get dumped back to unclassified Blackberry funnel in some fashion....and then onto the right KGB guy in Virginia. 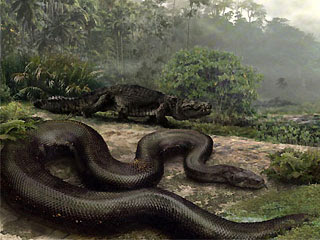 He weighed a ton, and lay about 43-odd feet long.....and he probably scared the crap out of anyone who came into contact with him. With the bones they found....dating back millions of years ago....he was the biggest snake ever.

The science boys have been pouring over the bones and the statistics for a while. I'm guessing they are a bit shocked over the find.

My take? I have a slightly different prospective. I'm wondering how these guys got taken out? Something this big....would take a whopper of a creature to take them down.....or else global cooling came. So far, the smart guys think these snakes needed a very warm climate, and couldn't survive anywhere else. Maybe there is a good thing behind global cooling.
at Thursday, February 05, 2009 No comments: