The Little Guy From Chicago 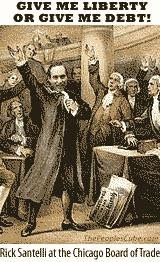 The CNBC business analyst...Rick Santelli....has set fire to the Obama Administration's stimulus and finance plans. As Rick finally stood up last week....in the midst of the Chicago trade floor.....he set the pace with the words of "having a tea party"......which was a pointed comment to the Boston Tea-Party of the 1770s period.

By Friday, several mainstream journalists had attempted to take Rick down a notch....and they were mostly pushed back. Rick wasn't favoring the bank bail-out plan.....which many of these dimwits had failed to realized. Rick also was very critical of harming 92 percent of America who are doing their best to pay their morgage.

I'm pretty sure on Monday....that Rick will continue his stump. He's not done yet.
at Sunday, February 22, 2009 No comments: 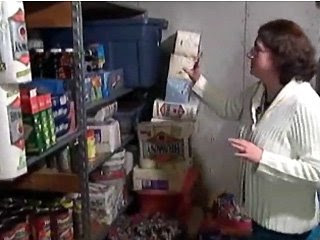 There is this couple, up in New Hampshire, who've decided to attempt and live off $1500 for an entire year.

The original story was over at Fox.

Over at Mahalo, they discuss how you can trim budgets, buy cheap, and stretch a dollar.

I'd have to adjust to alot less steak, alot more vegetables, and soups being a daily thing rather than a once-a-week thing. Cheap coffee would awful damn hard to sip. Course, the positives of daily homemade bread might be a pleasant thing.

Then I looked at the picture....realizing toilet paper fits into this $1500 deal....and it got me a bit nervous. I'm thinking rule number one in the bathroom....is to limit yourself to probably three sheets of toilet paper per setting. Thats the only way to avoid running out of paper before August. I'm probably a twelve to sixteen sheet guy, and there's no way I could adjust my situation.

Why are they doing this? To make a point. They might be right....that we are all wasting $4k a year on household expenses....maybe more. To be truthful....I could buy the awful cheap toilet paper, although I hate the feel of it. I could buy soup cans on the borderline of expiration. I could eat really cheap cookies that I hate. Maybe I could learn to use six sheets of toilet paper at a sitting.....maybe.

So I wish these folks luck, and hope they prove their experiment. With the depression in full swing, we may have to take some advice from them by the end of the year.
at Sunday, February 22, 2009 1 comment:

Eventually, It Will Happen

Up at Herbison Woods School....in DeWitt, Michigan....a couple of teens decided to take personal pictures of themselves (nude of course) and exchange with each (one boy and one girl). I should add...they are sixth graders. Apparently, the pictures then got passed out to friends, associates, and others. Adults eventually came upon the pictures, and naturally, the cops are involved now.

I would make a pretty good guess, that on a daily basis....there are 100,000 nude pictures now taken by kids under eighteen years old, and being passed around. Technology has come to our front door....and probably creates an unlimited number of problems.

The curious thing though....with so many shots being taken, and then passed around. People will eventually screw up on the email or the number they are sending the shot to....and you...an innocent male....one state over....get this picture of some lusty fourteen year old girl showing her assets. You stand there for about a minute...thinking "what the hell"....and then realize this is some screwup and you'd best delete the shot. Four days later, a cop shows up at your door....on a investigation. He wants your cellphone. You suddenly become the target of a local investigation into child porn. You kinda explain this....that this just accidentally showed up in your cellphone. They go through the process of "un-deleting" the image.

Over the next week, your name gets mentioned in the paper. Your lawyer says that he isn't qualified and you need a special "child-porn" lawyer who costs twice as much. Your boss is hinting that you might have to be let go.

So you stand there and realize that you are the innocent victim of this episode. Some girl passed her nude shot to a boyfriend, who punched up the number for his buddy....but missed it by one digit. So you got it.

We are all sitting in a potential mess now. Your son could be part of a class at school where some 14-year old girl decides to share her nude photo with the twelve boys in the class. The cops show up at your house to suggest child-porn charges against your 14-year old son. Or it could be your 14-year old daughter who gets a nude shot of her 15-year old boyfriend....and shares with five other girls. Then the cops find out, and charge the five friends with child-porn. The mess simply grows.

I'm thinking that we've invented laws that have gone way beyond the intended purpose. And technology is making this a bigger mess than what it should be. Eventually, we will all know some family that has this issue.....and ponder the safety and security of our own lives.
at Sunday, February 22, 2009 No comments: