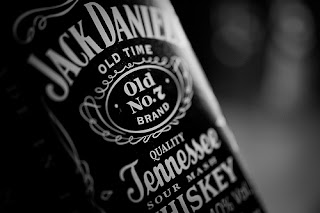 With all the chatter about the dim gift that President Obama gave British PM Gordon Brown....the 25 best American movies on DVD....I just sat there and thought about what I would have given Gordon.

Then it kinda hit me. I'd offer up a fine bottle of Jacky D's, with four nice shot glasses...maybe with the British flag and US flag on the side of the glasses. Gordon would have been impressed....poured a stiff drink for me and him.

We would have sat and discussed hunting, septic tanks, MG cars, British women, terrible British food, Phil Collins, and finally I would have left when the bottle was about half-empty.

Gordon would have remembered me and my sincere present.
at Saturday, March 07, 2009 No comments:

Borgs at the Door 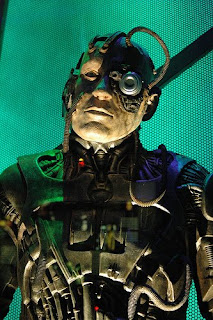 Being a Star Trek fanatic, I have a special appreciation for Borgs. When the writers came up with this concept….it was like striking oil in the front yard of your house. There was a vast wilderness of literature that could be written of the Borg, their battles, their strategy, and their defeat.

As we learned from the news yesterday….this Borg age is about to occur within our society. There is this strategy being discussed now….by some awful smart guys….who I suspect are really Trekkies at heart. They want to devise Cybots, who will go forth in the digital world….and fight for us (somehow….if Captain Picard were standing here….he’d be shaking his head over how a Borg would ‘help’ us.

There will apparently be colonies of these software robots, cybots, who link like a beehive…..and will defend computer systems against network intruders.

The folks behind this deal? The researchers at the Oak Ridge National Lab in Tennessee. They even have a nifty name for this project: Ubiquitous Transient Autonomous Mission Entities (UNTAME).

The theme of the Cybots? They form groups, function autonomously, respond almost immediately, and ‘assimilate’.

I sat there for a while pondering this….remember all of the episodes of the Borgs. And for some reason….I’m not really buying heartily into this Cybot concept or strategy. Behind the curtain….if I were one of the ‘evil intruders’ or some Chinese developer of spy software….I’d be looking to manipulate the Cybots and gain their trust. I’d want the golden key to unlock their door and reprogram them….to be my Borgs.

Eventually….some British knighted lab geek will find the Chinese golden key to the American developed Cybot, and then duplicate the key and toss in his strategy and rules. This will only confuse the ‘poor little Cybot’ even more. Then finally, the punk kid from a farm in Red Bay will figure out the golden keys from the Chinese dudes and the British knighted lab geek….and pass even more strategy and rules onto the ‘poor little Cybot’.

By this point, the Cybot will be a dangerous critter, residing on every PC in the world, and we won’t be able to dissolve him away or deal with his messed up strategies. We will be sitting at the computer….wanting to browse through Amazon, or read the Hong Kong daily paper, or blog on stimulus stuff….then discover that we’re under Cybot attack and need digital Captain Picard to take on the Borgs.

In reality, we probably haven’t improved anything….we just made our lives just a little bit more miserable in the long run.
at Saturday, March 07, 2009 No comments:

Got a Problem, Lets Meet

Last week, we got the 130 folks who met up at the White House to describe and plan the saving of American financial issues. It was an all-day type meeting....where a ‘meeting of the minds’ was supposed to come up with a fresh prospective.
This week....we got 120 folks coming in....as doctors, patients, business owners and insurers....trying to come up with a magic formula for fixing the healthcare system of America. The media proudly announces that as we currently run the world's costliest health care system, we are also leaving millions uninsured.

No one is really sure how this will turn out. Last weeks episode was pretty much a mixed result with a bunch of ideas already known in the public sector for fixing financial issues....and simply rebranding them as ‘fresh’ and pumping them back out again as the new agenda. The magic formula fix? If you want to make things affordable....you control the cost, period. Since the healthcare industry doesn’t want cost control....there is no fix or magic formula. It’s that simple.

At the end of this group meeting….it was announced that the administration is going to give the “experts” a year to come up with the fix….then smiling at the cameras as they hinted of how we’d do the right thing. I just stood there….if the system is so broke and messed up currently….why wait? If people are suffering right now….why wait? If kids can’t get the right care….why wait? The truth….a year will pass with nothing. We will remember this massive meeting at the White House for some fine coffee, donuts and cake.

Only a bit of observation....but once you get past eight people....the possibility of getting something done....rapidly starts to sink. For those of you expecting any change in American healthcare…..don’t worry….(wink, wink, wink)….we’ll going to help you in the end.
at Saturday, March 07, 2009 No comments:

I went to the BX yesterday…some Danish gal was in the electronics area…looking at the game choices….and wanting a copy of World of Warcraft. We chatted.
Her 15-year old son was deep into the World of Warcraft game. My son has been into it for almost three years. It was the same story. No social life. No friends in the local town.

Theres not much you can do about this state of life for these guys. It’s like an addiction. They all have superior math skills. They are very perceptive and intelligence. Out of each ten players….nine are male. No one quits and just walks away.

She asked me how one could ever get out of this shadow….and I knew the answer quiet simply…find a new home in a place where 56k still exist. World of Warcraft players need lightning fast speed to make the game and chat functions all work at the level they operate. At 56k….they are left with lagging graphics and they can’t function. It’s the only way you can break these people down.

After I left and walked out….I paced myself across the parking lot. I walked and pondered the grand Administration’s plan of bringing high-speed access to the heartland and across all of the rural areas of America. There are thousands of kids who’ve never been introduced to World of Warcraft. They are protected by 56k. With the president’s theme of high-speed internet….we are bringing another 250,000 warriors to World of Warcraft. It’s not a pleasant feeling.
at Saturday, March 07, 2009 No comments: