Everything Has a Cost

Alert! Alert! Fox now becomes the first broadcast network to turn down a request by President Barack Obama for a prime-time news conference.

Instead, they will offer on Wednesday evening...."Lie to Me".

What should you know here? A bunch of news analysts will try to analyze this in such a fashion to say this is politically motivated. These news analysts are paid by their networks...just so you know they don't work for free. Each time the President takes a prime-time slot...he costs each network around $10 million each. That's ten million that the analyst's network will not be allowed to make. At some point, the networks who cover enough of these....won't be able to pay the great news analysis team they have...and they will smile as they let one go.

Another thing that you should wonder about...will more people watch "Lie to Me" than watch the President? That's a gamble that Fox decided to take. I'm willing to bet that twenty percent of the public watch the drama....maybe more.

Then we come to the curious thing...will there be anything of substance to come out of the prime-time "show" (I mean the Presidential press conference)? If it's a rigged episode with eight questions from eight chosen guys...then why watch?

So for the other networks...how long do you allow the President to jump into your profit margin? Why not force him to do this on Sunday afternoon, or Saturday evening? Can you afford five more of these for 2009? Can you afford twelve more next year?

Fox is fixing itself to remain profitable and avoid money issues. What will the other networks do in the end? Ask for government bailout?
at Tuesday, April 28, 2009 No comments:

A Nickels Worth of Arlen

The top news of today? Arlen Specter switched from the Republican party to the Democratic party. Arlen, for those of you who don't know....is the top senator from Penn. To be kinda truthful, Arlen has been a hard-left leaning Republican for the past five senate terms that he has held the office.

Does this really matter? No. Arlen was already voting mostly Democrat anyway.

What Arlen isn't telling you....is what matters. The state Republican party.....quietly and without any press coverage....very likely told Arlen that at 79 (this year).....they just weren't going to support him for the office in 2010's elections. He was finished. They had their sights set on a new guy to emerge and take the party spot in 2010.

So Arlen got all upset....chatted with some folks...and has some financial backing for next year's election (so he thinks). Pat Toomey is at the top of the Republican group....and the likely winner in November of 2010.

As for Arlen? He's finished in the real sense of the word. He'll get five or six special deals for his buddies in the state by being on the right party. I'm assuming that money is going to go into someone's pocket, and the Democrats will ensure he gets leadership positions in a committee to help out his corruption situation.
at Tuesday, April 28, 2009 No comments:

Its a curious way of doing business. You start blabbing that you are the Robin Hood of a poor country....perform a couple of events to demonstrate this behavior....and suddenly a Taliban group is announced far and wide as the next “Robin Hood”.

In Pakistan over the past few months....using radio broadcasts and sermons.....these Taliban militants have started up this mystic image of themselves as the true Robin Hoods. They are helping the Pakistani poor.....fight the ruling hunta or elite, which naturally can only be corrupt and oppressive. The curious thing is that the poor are typically very conservative in nature....so this all makes perfect sense.

I sat pondering over this image and the way that the Taliban group suddenly went up a notch or two. There were evil characters in one sense, but then got the appreciation of the local crowds....by taking the guys in power down a notch. This worked in Peru with the Shining Path. When the Shining Path or Sendero Luminoso took up their walk to glory in the early 1970s....no one thought they’d be more than a bunch of radical small-time players. Over the course of a decade....they became highly respected in the rural aspects of Peru. They became Robin Hoods.

Then I sat and gazed over at ACORN....our less-than-radical crowd in urban America who have pumped up communities in the past two years to get their popular candidates into local government, and probably helped to some degree in getting Obama elected as president.

ACORN is truly not a radical natured organization...or at least they don’t portray that in public. Their goals all reach back to urban communities and bottom third of America (either the unemployed, the unemployable, or the bottom-ring of the working class).

ACORN sets up various community stages and programs that build onto public perceptions. ACORN knows that the urban school system doesn’t work and around thirty percent of the kids in the ninth grade today....will not graduate. They know that thousands of single girls in the state of Illinois under the age of 18 will have some kid and not marry the father.

ACORN works the Robin Hood angle as well as anyone else. They know that that their programs cost money....that the programs have only minimal value in the long-run.....and that there is always a political agenda tied to its fortune in the end.

So the Taliban guys in Pakistan....the Sendero Luminoso (Shining Path) folks in Peru, and the ACORN folks in America....all have the legend of Robin Hood working in their favor.

The curious thing....if we were to oppose any of these groups....is that you need a beast of a different nature from Robin Hood to settle these issues and get the public to reach a totally different view of their situation. My choice? Shane.

Yes, that cowboy character from the 1950’s movie that we all came to identify with.

Shane is bigger and bolder than Robin Hood. Shane is the guy who stands up and encourages the little guy the stand up as well. Shane never had a political agenda. Shane never cared if you graduated from school or needed hot meals from some community kitchen. Shane’s concept of life was that you’d take care of yourself, and form a community where others supported you when necessary. Shane had selflessness.

Shane versus Robin Hood? Who wins? That’s a curious question.
at Tuesday, April 28, 2009 No comments:

Air Force One and Its New York City Adventure 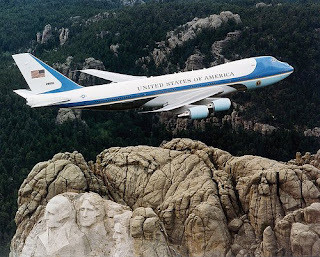 So someone decided that the old picture of the President’s plane (Air Force One) and Mount Rushmore, was not up to date. To be kinda honest, it was shot during the Bush era.....so naturally, that's something that has to be replaced.

So they paused over this problem. You could have faked the picture, but people get all upset these days when you fake pictures.

So they decided….after numerous hours of analysis, that the best deal was a picture of Air Force One over the New York skyline. Naturally….we aren’t talking about the plane at 20,000 feet. So the plan was to run Air Force One up around 2,000 at some points near the Statue of Liberty and around 5,000 feet at other locations….with a jet-fighter escort swooping down as well….and then they advised FAA who signed off.

Curiously, they didn’t say a word to anyone in New York City….even the Mayor (Bloomberg). Naturally, after the plane did the swoop…..there panicking workers and forced evacuations.

Naturally…..the White House said later that they were real sorry over doing this.

Senator Chuck “Much to Say” Schumer (D-N.Y.) said it was "appalling" that the FAA would plan the photo op "knowing full well that New Yorkers would still have the memory of 9/11 sketched in their minds. We cannot let this happen again."

So I’m sitting here, in a pondering state of mind and wondering….now that you’ve done all stupidity and wasted tons of fuel doing this stunt (remember, we are dying of carbon on this planet)…..will they use the pictures?

These are pictures that they probably can never use in any forum because they are “legendary”. So the Mount Rushmore shot will be around another year or so….and then someone will quietly arrange for another flyover of some other location….like the Arch in St Louis. As for the wisdom of the folks handling stuff over New York City? Well….these days….even if it was a blimp….you’d be in trouble.
at Tuesday, April 28, 2009 No comments:

Quietly….ever so quietly….a Gallup Poll now indicates that 55 percent of Americans support harsh methods used under President Bush, and only 36 percent say they were not justified.

The amusing thing….those who claim they have followed this entire debate very closely….say that they support the harsh methods by almost a score of 2 to 1 (61 percent support such techniques versus 37 percent who did not).

Even if you discussed opening an investigation into this practice….curiously…barely half (51 percent)….agree on this idea.

Naturally, this doesn’t help the President, Rep Pelosi, the Attorney General or the media. In fact, these statistics don’t help anyone much…..but President Bush, VP Cheney and the American public.

In this case, don’t worry….we are proceeding ahead until the media steam in three weeks….runs out….and then the Attorney General announces that he really can’t do nothing. Then the Senate will announce that maybe they can do something but they need to investigate in order to prove their case….thus keeping this in focus for six months while they play their game for the media. Pretty neat how this all works.
at Tuesday, April 28, 2009 No comments: