Plan B (Air Force One Parody) 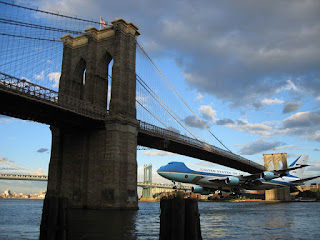 For weeks, the White House staff had been looking for a way to capture the imagination of the public, to bring them to a new topic of fascination, remarkablicity (no its not really a word), and enchantment.

So they turned to the one and only....Air Force One. The plan....fly under the Brooklyn Bridge in broadlight....with specially mounted speakers on the side that were playing Liza Minelli singing "New York, New York". Somewhere in the midway point of this flyover of NY City....suddenly things went wrong and the guys on the ground gave a thumbs down. By the time that the pilot had the plane in position for the Brooklyn Bridge episode....they yanked the sound and the city was denied one of the greatest performances of all time by Air Force One.

According to inside sources, Rahm, Axelrod, and even the President's telepromter itself....wept when the remaining plans were canceled.

The Air Force guys are pretty peppy over the whole thing. They hadn't flown under a bridge in thirty years and most had been limited to single engine propjobs when they did their experience. So this four-engine jet episode was the greatest feat of their life.

According to CIA sources....the Chinese are very upset about this. They've apparently never flown under a single bridge in their life and feel that this will trigger a fly-under-bridges spiral that they cannot win. Even the Russians admit that its going to be tough (they'll have to actually build some bridges first, before they can attempt this). Meanwhile, the Brits just laughed it off...they've done this so much...that they've even had their girlfriend on their lap as they did their routine.

Email ThisBlogThis!Share to TwitterShare to FacebookShare to Pinterest
Labels: air force one

According to the Hill...some Republicans are now asking Senator Arlen Specter for their donations back. According to Arlen, he would return donations from the last "cycle", if requested. He kinda expected this after switching from the Republican party to the Democratic party.

So several guys stood up and said "yes, we want our money back".

Total so far that might be involved? I'm counting up around $25k currently. Senator Orin Hatch (Utah) has a $10k contribution with Arlen....and he is leaning toward asking for his money back. I think Orin may just say this and then forget about the whole thing.

For Arlen, it's going to be difficult if fifty or sixty people stand up and ask for $100k back. He'll have to attract new Democratic sponsors quickly....just to keep financial plans in order.
at Friday, May 01, 2009 No comments:

Implications of the Flu

There have been numerous discussions over the news media on how schools will close as they see the flu bug. Today, I noted a private school in Tennessee.....Montgomery Bell Academy....which is closing for a week after one kid got the flu. They are hoping to isolate it and prevent further exposure.

So after a week...then what?

The kids are sitting laughing over this entire game. But there are implications here. Suppose school was to end on the third week of June.....so now you've moved it back to second week of July. There's barely two weeks then before the next school year starts.

Will this whole game repeat into the new school year? From August to December.....five or six missed weeks of school? And if you repeat this into 2010? You could be talking about no summer vacation for 2010 at all.

There are already companies coming out with strict policies about bringing your kid into work (whether they are sick or well). Some folks have virtually no sick leave whatsoever, and barely fifteen days of regular leave a year. Some are single parents trying to make a job and a family work at the same time. Some have no back-up plan and will be stuck leaving a 8-year old kid whose sick at home alone.

The wonderful thing about the 1918 Flu episode....was that families were intact and schools were mostly local.....meaning you walked to work or to school. Most families settled around their relatives and had a support structure.