Then you start to review his entire statement....more women....more minorities....and you only have nine positions to mess with....with barely one coming open every four years on average.

Maybe the answer is simply American Supreme Court Judge Idol....with a group of 15 potential judges lined up each week....performing for the audience....with three Senators sitting as TV judges....and then a call-in vote deal. We could ensure the best performer gets the position in the end.
at Sunday, May 03, 2009 No comments:

Those words were spoken this past week by Texas Representative Joe Barton....on the BCS bowl system that exist in NCAA football. As most of you know....I walk a narrow line on NCAA football. Being from Bama, its hard to take a stand against NCAA football. On the other hand....like a growing number of folks, I think this whole semi-professional football situation is making the univerisities into a bunch of fools.

Coaches make as much or more....as the state governor. You have players on every team who probably can't deliver in the classroom but they find the "right" program to keep them in the college. The status of the college is closely tied to the success of the team. All of these things start to add up.

So Joe and a number of folks have figured out the entire game....money.

The apparent strategy here? Open up a 16-team playoff, which 15 total games. My guess is that we'd rig up standing strategy for the final three games (the two semi's and the final).....New Orleans and Miami would likely always get those two, and LA would get the final. Some might question this but we need some folks to sign on and just agree to something in the beginning.

The twelve other games? Well, this is where things get interesting. We could put the games up for a bid and start to force the stadium management folks into a corner.....or we oculd just pick these at random. Personally, I'd like to occassionally see a game played in Green Bay or upstate Michigan in December.

The chances of Joe getting this changed via congress? Well...I'm pretty sure this isn't in the top one hundred projects that Nancy Pelosi has. I'm confident that even Harry Reid doesn't have this in his top one hundred. And unless you deem this a national emgerency.....I kinda doubt that President Obama will do anything about this. 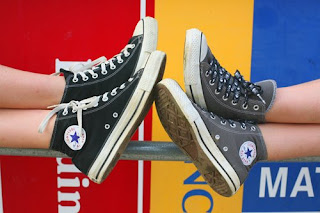 There was this stupid story out this week...."Outage over Mrs Obama's tennis shoes".

Apparently, she went out and spent $500-odd bucks on a new pair of tennis shoes, and the progressive side of the spectrum jumped all over this....saying that the homeless folks are upset about this waste trend.

I thought this was pretty silly. In fact, anyone spending more than $75 on a pair of tennis shoes....I think are pretty silly.

When I was a kid....my first pair of tennis shoes were the Chuck Taylor All-American tennis shoes....which I think my mom paid around $8 for a pair.

I will admit this here and now....they were absolute crap. There is no support....they barely breathe....and they tended to wear out in three months. They were ok on the basketball court....but anywhere else?

I was looking at some ad brochure the other day here in Germany, and here were 2009 Chuck Taylor All-stars....for a whopping $44 (the on-sale price). I just sat there and scratched my head. This is the cheapest pair of shoes you can find. They are made in China. And the manufacture price is probably $5 at the most. The store is likely making $15 profit off each pair, and even the truck driver who drove them over is probably getting a buck somewhere in this formula.

Somewhere in the last thirty years....we've become lost....and tossed real values out the front door.
at Sunday, May 03, 2009 No comments:

Hypocrites. After I stand up and look over a mess...and then realize that I've got a bunch of hypocrites in front of me....I get kind of riled up. Maybe its a Bama trait.....maybe its just a natural feeling....but it irritates me.

Here in Germany...we have the German version of American Idol. At the beginning of the season, they took their fifty top candidates off to some island in the Med....for a week of "tests". Basically, it was all publicity games....making the contestents do runs across the beach.....singing while upside down....and then at one point with the ladies....making stand there in a bikini with a boa around their neck while trying to sing.

I thought this whole game with the boa was tasteless, and almost all of the ladies involved were fairly afraid of the snake. The three judges kept this boa game going and the 25-odd women all got a taste of this.

So we go through the entire season. We were down to three contestants last night. We have the gypsy gal who can belt out a song but at best....she's a three star singer. Everyone likes her because she's been fairly nice throughout the competition. Then we have "sonny-boy" who gets there with looks and ability, but he's also a three-star singer. Oh, and I should mention that most of his songs are traditional female-sung songs, which is fairly weird to hear from a guy. Then we have the "bitch". This 18-year dimwit blonde has enormous singing talent, but everytime she opens her mouth, you get a dose of crap on one of the other guys in the group. The media have called her "poison". The whole show lays in poor shape currently because of her antics.

So last night....with the three of them left.....she comes up for the final song....with a boa around her neck. The three judges all harped on this, that it was not proper and dumped on her. They were hoping for this kind of antic because they really didn't want her to be in the final show (she might actually win). There is so much negativity on the show currently....that it's hard to see a 2010 show occurring.

Naturally, I kinda disliked AnneMarie (the "bitch"). She was everything charming on one side, and some dark character on the other. She knows that she has a future....she'll be one of the top singers of 2010 at the current rate....while losing in this show. I'm betting she already has contracts lined up and various shows ready to go.

I sat for a while....thinking about the boa episode....and then remembering the stupid boa episode that the judges put on earlier in the year. I keenly remember how stupid I thought it was then, and it was still stupid now. What AnneMarie did in this case.....was cast the whole judge episode into a mess of hypocrisy. The judges already played this game....why couldn't AnneMarie play the boa game as well?

I'm reaching the point with this Idol show business where its a joke. I shouldn't be watching this....but there just isn't anything of value at that time slot. No one wants to compete against the damn show. I may have to drag out my copies of King of Queens and just settle back for some old stuff.
at Sunday, May 03, 2009 No comments: