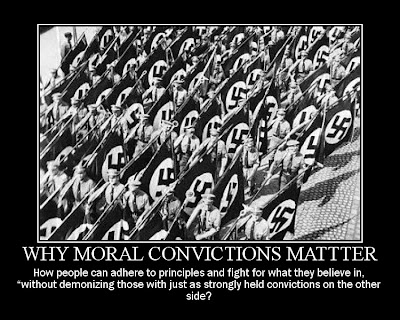 Sometimes, we tend to put an argument into a legal sense, and want loose ends to tie easily. But when you examine the situation and realize the bigger question of what matters....then the original question dissolves.

So read the little print first, and then look at the big question.
at Sunday, May 17, 2009 No comments:

Without alot of fanfare, and I doubt that your local paper even mentioned it....but last week...PBS suddenly woke and decided that there was just too much religion on PBS stations.

I kinda sat there for ten minutes...trying to remember the last time I ever saw some kinda religious programming on PBS. I could remember the kid's shows, the far-left liberal shows, and the British comedies...but nothing religious.

With new management in the government...PBS is now discussing broadcast of religious programming. Right now, its just a discussion. The boys would meet next month and actually vote on the recommendation to strip the affiliation of any station that carries "religious" content.

What happens in this case? You don't get Sesame Street, Frontline or NOVA.

I looked around....and its interesting. Most major towns have their own PBS station locally, and the majority offer an hour or two each week of local religious programming. In fact, the PBS out of Provo is run by BYU (the Mormon University), which airs around two hours a week of religious programming.

The curious thing...these stations would have two hours of open time. My idea would be to fill that two hours with far left-wing ideals. You never get enough liberal news on PBS...so this would be neat. You could fill it with Hitler speeches. You could fill it with drunk college babes from Arizona State doing imitations of famous people. Heck, we could have Septic Tanks Made Easy, a one-hour show each week where we help some fella from Red Bay dig up his tank and fix the problem.

Obviously, this religious programming has confused some people and upset some folks. The minute you hint of Jesus or Moses....folks start getting nervous....like you might be brain-washing them. Obviously, if you were some CNN dude tossing global warming quotes....that would be different because that's not brain-washing.

It would seem like that PBS management should have more things to worry about. But obviously, if thine eye offend thee, pluck it out, and cast it from thee: it is better for thee to enter into life with one eye, rather than having two eyes to be cast into hell fire.

Don't ask me where I heard that phrase, but I think it's pretty good management ideals for the PBS management team.
at Sunday, May 17, 2009 No comments:

So we start this blog with a nifty study...accomplished by the kindly and really smart folks up at the Lawrence Berkeley National Lab (and the Carnegie Institution helped too). The boys sat around and finally figured out that climate change (note: NOT global warming) since 1981....has triggered lessening amongst corn producers world-wide of about 1.2 billion tons a year.

I liked this article. The whole topic got dragged out by those nice folks at Wisconsin public radio. In fact, the title on their site says it all...."Perilous Picture for Corn". At some point in the article, there is this comment "We need action", and I just sat there. I was pondering long and hard on this situation.

But then I turned around and there was this guy who just wouldn't accept this report. Doc Matt Roberts is an associate professor in the department of Agricultural, Environmental and Developmental Economics at Ohio State University.

Doc Roberts says that there's one serious problem with this perilous situation on corn....the entire study ignores the factor of supply and demand. Farmers grow what sells and they dump what doesn't make a profit. This factor....never came into the eyes of National Lab folks.

Doc Roberts even says that there is a total disconnect by the weather folks on how crops expand and contract. Amazingly enough....if you only need X amount of corn for corn flakes....you won't grow more than that amount. And if you can buy it cheaper from Mexico than Wisconsin....then you will do that.

Naturally, the National Lab guys didn't say much after this. They probably huddled in the back room....trying to figure out the next crop to discuss....perhaps onions?
at Sunday, May 17, 2009 No comments: 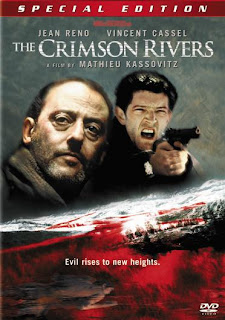 Most Americans have never watched a French movie ever. Me? I've probably watched around a hundred of them. Mostly in German....some with English sub-titles. There are few that are four-star. There's only one that's a five-star in my book....The Crimson Rivers.

Jean Reno carries this movie and probably makes every scene worth watching.

This was made back in 2000. I've probably watched it three or four times now.

Its a murder movie...but has tons of implications throughout the movie....from Nazis to cloning.

If you get the movie, there are two great scenes.....the first being where the junior detective has entered the boxing gym to get an answer to a question. Naturally, things go wrong. The second scene is a car chase down a mountain road, with Jean Reno and his junior partner being chased.

So its unlikely that you might find it in the local video shop, and you might have to rent from afar....but do it. This is an excellent French movie worth watching.
at Sunday, May 17, 2009 No comments: