How Many Rhode Islands Would Fit into Bama? 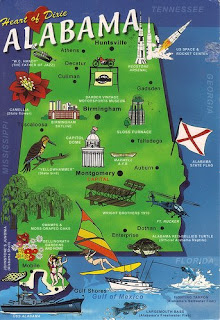 Its a political scenario....what if we broke Alabama up into the same size units as Rhode Island? How many more states would we create? Answer? 33.9.

I sat and paused over this number today. There are around nine states of half the size of Alabama. This entire game we see played out each week in DC....with one hundred senators....kinda resembles baseball of the 1960s. We've reached a point where we recognize all the players and they've all maxed out on positions and committee positions.

I started off on Saturday with the concept of three states created out of Bama. North, Central and Frenchy-land (for those of you in Mobile). Realizing the mighty power of two lousy senators from Rhode Island....I've decided that three states out of Bama.....simply isn't enough. I'm thinking sixteen states now. There isn't reason not to think big.....the Rhode Island folks think big....and get away with it.

So these are my sixteen new Bama states:

1. Frenchy-land: the area around Mobile. The capital would be Mobile of course.
2. Birmingham: draw a 40-mile circle around the town and just toss the whole thing into one state. I realize that it'll be the highest murder-statistic state in the US....but frankly, I don't care.
3. Huntsville-Athens: it'll be referred to as "Rocket-State".
4. Auburn: it'll be referred to as "Tigger" and their sole source income will be NCAA football. The football coach will be appointed as governor as well, and provided a SUV as part of his governor's job.
5. Florence-Tuscumbia-Muscle Shoals-Sheffield: referred to as "Shoals" from this point on. Half of the state will be declared a alcohol-free state and the other half a alcohol-banned state. The governor will naturally live across the river in Sheffield....the land of milk, honey, and corruption.
6. Scottsboro will have the entire northeast part of the state under their domain. Their chief source of income will be Monday trade-day operations and fishing licenses.
7. University of Alabama will be a state unto itself, with a population of about 120,000....to include the student population as well.
8. Montgomery would get a 50-mile circle and have the highest concentration of progressive-minded folks, and have the first liberatarian governor.
9. Fort Payne to Cullman would be this snake-shaped state with a high concentration of Baptists.
10. Jasper to Red Bay to Russellville. This section would be a huge area, with a bitter fight over which metropolitian area (Jasper or Red Bay) should be the state capital.
11. Talladega-Selma. A fairly wooded state, with a significant black population. They would naturally be pro-environmental and very Democrat.
12. Dothan-Troy. The bottom corner of the state.
13. Opp. Everything west of the Dothan state. Pretty neat name for a state anyway....Opp. We'd probably have to bring in some expert political figures because this whole state thing would be way too much for the locals to handle.
14. Bay Minette to Linden. The capital would have to be in Bay Manette, which would be overwhelmed from the start with this status of a capital city....and then likely bring in a Hooters to ensure legitimate status as a real capital city.
15. Gordo, would get the entire western section left of Bama.
16. Whatever is left is tossed into one state.

The neat thing about my plan is that we get 30 new senators from the region, plus 15 new state governors, state attorney generals, and various posts. Plus we could toss in over 8,000 folks who'd have to be hired to serve as state employees. Construction of fifteen new capital buildings and governor's residences would help the construction folks in the region. Plus each one of these states would eventually demand to have a NCAA college program, with real football. So we'd start to develop a more intense rivilary with each other.

Just like baseball in the 1960s....expansion will help Bama in the end. We'll have the potential of getting five or six senators on Larry King's show each month. Bama-land will start to gain power and take on the sole state of California.
at Sunday, May 24, 2009 No comments: