Once upon a time, in a faraway land, the king and his subjects determined that the kingdom’s budget was simply not working right. So the subjects came to suggest that the richest in the kingdom….ought to pay more. The king came to agree with this logic….even saying that the rich would be “willing and able to pay their fair share”.

So the kingdom created a new millionaire bracket, raising top marginal income-tax to 6.25 percent. Somewhere in the midst of this….with various other local taxes included….this was going up to 9.45 percent.

So a year would pass…and the king’s revenue men quietly came up to the king and kind of announced that things weren’t exactly working out well.

The king was disturbed….what could possibly be wrong?

Well….normally, there three thousand millionaires in a kingdom that would submit that revenue paperwork. But now….it was barely two thousand.

The king was kinda miffed. What say you? A thousand millionaires have gone from my kingdom?

So in the scheme of things, the revenue men of the king came to collect 6.25 percent of nothing. For those in Red Bay….that’s zero, and it can never be more than zero.
So the King is missing almost $106 million. Since the king hasn’t cut his budget and can’t possibly approach his royal subjects to cut his budget….he’ll have to pass this $106 million back onto the regular non-millionaires of the kingdom. For those of you from Red Bay….wondering who exactly are non-millionaires…..well….it’s you buddy.

The sad thing to this story is that the king can’t readily recruit new millionaires to move into his kingdom. It’s a tough sale….come to be taxed more by the king and be happy over this royal privilege.

So, here’s the thing. The story is true. The state is Maryland. And the king is Gov. Martin O'Malley.

And you wonder “people willing and able to pay their fair share”….where exactly do people find brilliant moments of wisdom and utter these phrases to the media? But in a royal world….anything is possible.

Don’t worry….this won’t be on CNN, MSNBC, ABC or such. Real journalists would have gone out to find the missing 1,000 and then get a personalized interview with five of them….explaining how they saved their portion of the $106 by moving to Delaware. The funny thing….after watching this….from the remaining 2,000 millionaires….five hundred will make the judgment to pack and move. That’s how the media helps to fix things.
at Thursday, May 28, 2009 No comments: 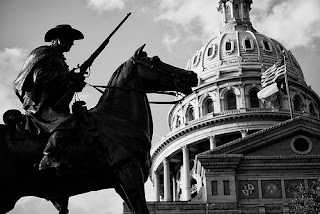 This is a rather odd story, with twists and turns….a bit of a smell to it.

There is this employee who is a section supervisor of a hospital unit in Texas. She has a husband who spent 24 years in the Army…..one son is an ex-Marine, a second son is a Army veteran….and a daughter is a combat medic serving in Iraq. To put it mildly….the supervisor is patriotic (about as much as an American can be). At some point, in her office which shares with three other supervisors….she decided to mount a 3-ft by 5-ft American flag on the wall of the office that she shares.

On the Friday before Memorial Day….she arrives at the hospital to find the flag had been taken down because one of her associate supervisors had complained that the flag was “offensive”.

For the sake of this story…..based on facts in the press….the associate supervisor with the flag "offense" issue…is an African woman who arrived in America around 14 years ago.

At some point in this story….based on comments by the hospital….which they simply told this woman that patients and patient’s families had also complained over the hung American flag.

Over the weekend….this story began to run on its own….with thousands of people plainly upset over this unusual episode. The stories also suggest that the flag was laid upon the floor….which is a ‘forbidden’ place for a flag to lie.

The mother-company of this hospital is based out of Kentucky. So by Monday, they had received more than just a couple of phone calls. No one appears to have sided with the taking down of the flag.

Naturally…at first, they had no comment. By Tuesday, they finally decided that the flag would be allowed back to the office….although something would have to be worked out….perhaps the size of the flag or the location where the flag would hang. The mother-company simply doesn’t want any stigma attached to them over this issue.

Meanwhile, back in Texas….folks are furious and a bit upset.

I read this story…and several things bother me. First, the words spoken about patients upset or their patient’s families upset….I don’t buy. Whoever uttered this….is boldly lying. I’ll say it to their face. I don’t think a single patient uttered a single negative word about the flag.

Then I come to the woman who is complaining about the flag. Whatever management skills she pretends to have or qualifications to manage anyone….I would question. She is unable to confront people or grasp the problems that she can create on her own. The attitude about the flag? Fine….I believe I’d start looking for employment back in Africa where she might find people who stand in her share of beliefs. If she’s unhappy in America…I’m sure she can find the conditions she desires….in the majority of African countries.

The only thing worse than this whole bizarre episode? If this had been a Texas flag….on Texas soil….it would be an ounce holier than the American flag. And some Texans would have laid into this complaint and stood their ground. Texans tend to be boldly patriot about being American….but they are twice over on being proud of being Texan.

Working on military installations all my life….I’ve kinda had to grasp this dedication to the flag business. On a typical base….there are likely 250 flags. In fact….other than the gym and bowling alley….those are probably the only buildings on a typical base where you won’t find a flag. Heck, we have two locations on Ramstein where every single state flag is kept out on display.

So this is an odd story. If this had happened in California….reaction might be different and someone would have an anti-flag rule to enforce the issue anyway. But sadly, this was Texas….and this is about the last place to slander or slap the flag around.
at Thursday, May 28, 2009 No comments:

How Would You Destroy Chrysler?

Well....its a rather tough question. Under 99 different scenarios....you could hurt them...but never destroy them. Even with the government running Chrysler....they could probably survive on....with less profit....but still survive.

Suppose you whipped up the dealer list....and said half have to go....for the company to survive. Then you decided that being part of the best party....the Democratic party....meant that those dealers who were more pro-democrat....would survive, and the remainder would be invited to leave.

Suppose you were stupid enough to do something like that?

Then someone sat down and put the entire closed dealer list up on a Excel spreadsheet....and discovered that 90 percent of the closed dealerships had one common factor.....a dealership that strongly supported republican dealerships. Then suppose instead of the media....which were incompetent anyway....you actually had the ability to transmit this story out to 3 million Americans in an hour.....and to 100 million Americans within twenty-four hours?

Then suppose the media was now stuck....they actually have to report this because people were asking way too many questions. Then they started to question the US government and their involvement in the whole game.

Then lets imagine that six of every ten republicans sent a letter to the surviving Chrysler dealer in their region....and just said they won't buy their product....nor will their son....or daughter. Then they turned around and told the car rental companies that they won't rent a Chrysler product. Suppose a month later, the remaining four republicans, and then fifty percent of the independent minded folks did the same thing.

After about six months....the remaining dealers would ask what they did wrong. Ford would be standing there and smiling.

People would write songs of sorrow and woes over the pitiful demise of Chrysler and how they just couldn't sell in the new age....but never explain in the song why people just drove on by the dealerships.

Yes, suppose such a thing were to happen.

Strange thing....seeing a car company dumped into a pit....because they got deep into the political game. Maybe GM is going to dump dealers too? Maybe they've got a list already? Maybe they have some promised deal too?
at Thursday, May 28, 2009 No comments: