The Trailers are Boat-Anchors Now 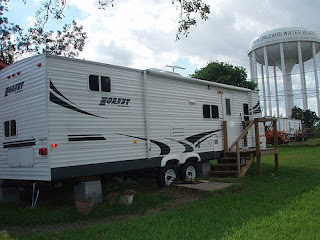 Quietly, without much discussion on the major media sources....we learn today that the White House is going to basically giveaway all of the FEMA trailers that were for housing displaced families around Katrina, Louisiana (otherwise known as New Orleans).

First, lets get to some facts....these were cheap trailers which were readily sold at discount prices to the federal government. They were NEVER meant to be permanent homes for anyone.

Four years later, the folks still using these....simply have accepted them as home....and will likely continue to do so....for years to come. The value of the trailer....even if the government wanted them back? Less than $3k each.....I'd bet.

The curious thing about this 'giveaway'....is that a bunch of folks are going to get a trailer....and simply give up on anything else. So in twenty years....as you travel down to Katrina, Louisiana....and see the magnificent city by the Gulf of Mexico....you'll see a trailer or two....then three....and then realize you are back in Katrina-ville. These guys will still be living in the trailers....and accepting that as their best run of luck in their life.
at Wednesday, June 03, 2009 No comments: