An Equivalent of Bobby Sherman? 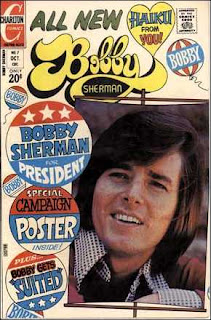 Out on a site that I visit...after numerous comments on the President's trip to Europe and the results....someone finally put a five-star quote...which I'd like to blog:

"President Obama is the journalists’ equivalent of Bobby Sherman". (by MadamQuinot)

Being from the 1970s generation and remembering...everyone fell over themselves in the Sherman "era"...which lasted maybe four years max. Then, as if in a puff of smoke...Bobby disappeared.

The key factor to his disappearance? He couldn't act....and other than two songs which got played over and over....he couldn't really sing.

There is this strange comparison that I can make between Bobby Sherman and the President....in that the President gives great speeches but mostly by teleprompter and you generally get the feeling that there ought to be background music set to the words. A speech almost gives the feeling of going to a rock concert....you get dopey and all peppy afterwards...wanting to chat for hours about how John Cougar Mellencamp was or how Heart was or how Ozzy Osbourne was.

At some point, Bobby Sherman, John Courgar Mellencamp, Heart, and Ozzy....all became yesterday's news when people got finished with their 'high'....and came back to Earth.
at Monday, June 08, 2009 2 comments: