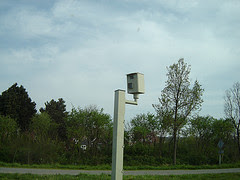 Everyone that lives in Europe is used to speed cameras. They tend to be absolute. When the ticket arrives in the mail....here is the speed and the picture...and the payment situation. You rarely get out of it. In Germany.....most are mobile situations. Here in Kaiserslautern where I live, there are four permanent speed cameras. We all know the locations and avoid speeding around these sections of town.

This past week, as I toured Amsterdam and stayed up at Leiden.....I arrived with my GPS running full-power. I have the option available to show speed cameras and warn you ahead of time. From a minute or two outside of Leiden....I began to look at this huge image over the next mile or two.....it was a blacken area covering the entire town. I brought the GPS picture down to just things within 1,500 feet of the car.

Block after block.....these speed cameras were just about everywhere. I hadn't experienced this on the previous visit to Leiden.

Within a town of 120k people, I would imagine that they have at least 300 cameras within the town. It's a curious strategy. You basically give up on cops and then start to pull in revenue while running this simple but direct program. I noticed that there just aren't any speeders in town. How many cops did they cut? Maybe five or six....I'm guessing of course.

Over two days.....I didn't see any accidents...which is a bit unusual when you consider the population of the town. Maybe the cameras improve safety.....but I won't admit to such.

So if visiting Europe...and in the Netherlands region with a rental car....ask for the GPS option. It might help save you a hundred bucks on speeding tickets.
at Sunday, June 14, 2009 No comments:

Sex in the City (Sheffield-style)

This is a sad story in some ways. First, I have to introduce you to law and what could happen to you. In the state of Bama....fraudulent use of a credit card equals a Class C felony. If you get convicted, under any circumstances....it's a penalty of 1-10 years in prison.

So this is the sad and tragic tale of Mackenzie Patrick Riede of Sheffield. I won't put up a picture of the guy....mostly because I feel sorry for the Bama dude.

Mackenzie has been charged with fraudulent use of a credit card. Yes, he could be facing one to ten years in prison.

The amount he charged? $300. Yep....$300. Actually, the local cops were smart enough to figure out there were three uses of the card, so they are doing up three charges here.

So this is the woeful tale. Mackenzie is twenty-five years old. He apparently took momma's credit card on three separate occasions and call up a 1-900 phone line. Yep, hot lusty phone sex, with a gal from North Dakota or maybe even from Bessemer.

Weeks passed after the episode....it was only after the credit card bill came to momma that Mackenzie's world began to fall apart.

Apparently, momma got all upset and riled up....then confronted the boy about the calls....which he apparently admitted to. Momma called the cops. Quickly, the Sheffield cops react (there isn't much crime in the daytime around Sheffield, when most cops actually work). The cop in question drove up and the kid ran out the backdoor. It was serious consequences....almost like one of them Cop's episodes where cops come to the door for a meth lab or stolen property....although in this case, it was phone sex....paid phone sex.

The cops eventually found 25-year old Mackenzie.....hiding under a neighbor's porch. That's pretty much where all Bama guys under suspicion of trouble hide.

So now...on top of the three counts of missing Momma's credit card without her permission....he also has criminal trespassing and resisting arrest up on the ticket.

I was going to wrap up this blog but then the cops added one vital detail. Apparently, they did a complete analysis of the bill and came to the idea that he used the credit card once on one day....then took a few days off, then called twice on another day. Can you imagine that? Twice in one day?

I'm guessing momma didn't come down to bail him out. I'm also guessing that this has given Mackenzie a bad reputation there in the local area....stealing momma's credit card and then doing phone sex....probably even on her phone.

So here's the bottom line. If you live in Bama...the last thing on Earth you want to get a reputation on....is borrowing Momma's credit card and called some gal in Boise for ten minutes of hot lusty discussion. The sad thing is that most of the cops over at the jailhouse are probably asking him what the 1-900 number and probably calling the minute they get off-duty tonight.
at Sunday, June 14, 2009 No comments: