Yep, Wrong Was I 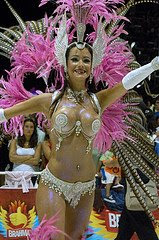 So that's kinda the end of governor duties for this dimwit.

The amusing part of this is that a guy had to go to Argentina to get a hot, busty, lusty gal.....when you had plenty over in Nashville or Birmingham. Heck, you could have accepted trailer park trash and found some gal who knew how to clean fish, vaccinate cattle, perform brake jobs and lived over in Mobile.

But no, he had to probably go and get all hot over some carnival queen out of some hot lusty Latin country. I sure hope that the other southern governors don't get creative ideas and all start running off to Argentina.
at Wednesday, June 24, 2009 No comments:

"We Wipe You Out"

Today, one of our lesser, very lesser....in fact....almost non-existent threat countries....decided to let us know that they intend to wipe us out.

I was almost prepared to open up a can of Mountain Dew that I kept for blessed events (I'm trying to cut back drastically on Dew)....to honor the threat made.

There are so few countries that have been told directly that they were to be wiped out. Its a nice threat....certainly one that the US has never really used. In fact, we don't really make threats...we merely lay down how you can avoid a problem....and if you can't avoid the problem....we have an establish military that can take care of business. Talk to us...isn't much unless you really mean it.

So out there in the far off regions of North Korea....a couple of guys named "Joe"....are standing around their house....mostly in the dark because there's no electricity....and wondering how they can possibly wipe anyone out if the power is off for sixteen hours of the day? After a while...because there's no booze to drink and no CNN to watch....they all go back home and just lay there....waiting for the sun to arise in the morning.

For some reason, I don't have any belief in this threat. And for anyone who might.....well....life's kinda short anyway....don't worry about threats until they come to your front door.
at Wednesday, June 24, 2009 No comments:

A Serious Reflection of being Governor 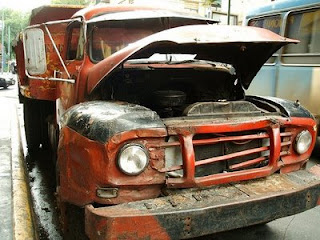 Once upon a time in America, especially between 1920 and 1940, if you were a governor of any real state (Penn, New York, Illinois, and New Jersey), around June time frame...you packed a bag or two and left. You might have told the wife of your travel plans...but her job was to stay in the state capital. Your schedule? You went to Montana to fly-fish....you went to Miami to drink gin and lounge with hookers....you sat in a cabana in Havana playing poker with a dozen mafia guys while making election plans for the fall.

This was life in America. The media didn't really notice because they knew you were out of town and this was the period of quiet in every state capital for six to eight weeks. No one in the entire state cared.

The best part....if a flood or tornado or volcanic eruption occurred....then the guy who was in charge of the cops or the fire department or the emergency services department....did their damn job. You didn't hire or promote losers into these positions.

So today, a mess of folks are terribly upset (mostly media folks and democrats) down in South Carolina. The governor up and disappeared. Folks got all worried and worked up. Naturally, they demanded answers. The final answer given by the staff and the wife to some degree....was that Governor Mark Sanford was in the Appalachian Mountains....hiking.

This answer lasted about eighteen hours.....then Sanford answered the truth. He had gone off to Argentina for an erotic....oh....sorry....an exotic vacation. I remember talking to some guy once who spent ten days there, and later claimed it was kinda like driving through the redneck portion of South Carolina. In this case....I don't see what the heck the governor got out of this trip....other than fine Argentine steaks and lots of beverages.

So folks, mostly democrats are terribly upset. What if there had been a earthquake or tornado or hurricane or walrus attack or UFO arrival or Pepsi truck overturn or church fire or peanut butter catastrophic event or bear attack or meteor event or volcanic eruption or Jesus arrival or sandstorm or anthrax attack or Jihad attack or train crash or piano factory fire or failed newspaper or just a phone call from President Obama to ask what's a fine color?

If governors had the responsibility of carrying the nuke button box....I guess we'd demand more. In this case....I'm thinking that every time that a governor leaves the state, gets dental surgery or is drunk....he needs to sign over the governor's power to Uncle Joe who is the pretender Vice Governor. Maybe after a while, we might even notice that both the governor and Uncle Joe are both drunk and we've got nobody in charge. Then what?
at Wednesday, June 24, 2009 No comments:

The Culture of Hay and Hauling 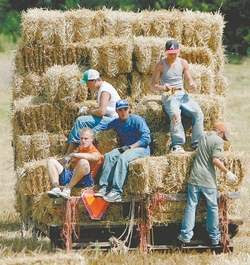 Summer has arrived, and hay season is in full swing.

As a kid in Bama, I hated hay season with a passion. There was a set procedure to all of this. You typically did this two weeks prior to the 4th of July or two weeks after...depending on the weather. It had to be dry for three or four days prior to cutting. This all occurred with a average temperature of 94 degrees. And the grand parade of hay hauling started after the bailer finished up his business around 11AM.

It is a hot, sweaty and nasty affair. Some guy drives the truck or tractor....and two guys stand on the back. You toss thirty bales onboard and do it in a fashion so they don't fall off easily (after a couple of these events....you really don't want anything to fall off).

After a haul, you will have sweated out two pounds of water and then sip five glasses of ice cold water to cool off. The boss (my dad), never believed in Gatoraid or such. It had to be ice water. So you ran through six to eight of these vehicles in an afternoon, returning each time to a barn which had a hot tin roof and just barely extended shade or any relief from the temperature.

By 7Pm, you were finished, and you feasted on chicken or steak. You took a shower and washed off all the sweat and pollen. And by nine, you were laying there tired and fell asleep with no effort.

The funny thing....a year after I leave the farm....my dad started to arrange the round bales....which meant the end of neat tidy small bales. One guy could move thirty of the big round bales in an afternoon with no effort.

Some guys in Bama area stuck on the 1950s idea of small square bales today....and still do it with five young punk kids who they pay $6 an hour to round up the bales.

It was miserable work and I can think of a thousand things that I'd prefer to do....more so than hay hauling.

So when I see these pictures of hay hauling in full swing....I sit there for five minutes contemplating this past of mine. It was never safe work. Everything involved machinerly of some type....moving machinerly. There was always the possibility of snakes appearing out of nowhere. There was the possiblity of loading an entire truck....way higher than safe.....and then having it fall apart at the wrong place.

Simply another hot summer in the Bama land.
at Wednesday, June 24, 2009 No comments: