Just a Guy You Know

This is a sad and woeful tale.

Once upon a time...there was this smart kid of sorts...who ended up becoming a Oceanographer. Roger was his name...Roger Revelle. Roger was in WW II...the big war....and was in the navy. Things went well for Roger after the war....he ended up getting this fine job as the Director of the Scripps Oceanographic Institute in La Jolla in San Diego, California.

Roger learned in those days that you need government projects....funding...to make your house payment and buy fine shoes....so he obtained major funding from the Navy to do measurements and research on the ocean around the Pacific Atolls.

Somewhere along the way...Roger ended up hiring this guy....Hans Suess. Hans was this pretty fair Chemist from the University of Chicago. We can be honest here....Hans was always interested in carbon. Hans for some reason....had this fascination about carbon in the environment from the burning of fossil fuels....coal, oil, natural gas.

Roger and Hans wrote this a science paper in 1957. Naturally, they discussed the idea about atmospheric carbon dioxide creating a greenhouse effect and causing atmospheric warming.

The curious thing about this entire paper by Roger and Hans...this was solely an attempt to get more funding for more work. If they could have found a way to show a problem...they knew that some idiot in the government would fund a project to study it.

After this published paper....Roger ended up hiring a Geochemist...David Keeling. Dave's only purpose in life? Dave was supposed to come up with a method to measure the atmosphere and all the Carbon dioxide it contained. Naturally, Dave worked quickly....and ended up publishing his on this topic. Dave's subject? He showed the increase in carbon dioxide in the atmosphere...and this could only happen....naturally by the burning of fossil fuels (natural gas, oil, coal). You can kinda guess how the team concept works in this whole affair.

At this point in time...Dave, Roger and Hans....had yet to show proof that carbon dioxide was in fact a greenhouse gas.

Dave, Roger and Hans also had yet to explain how this trace gas would ever have some effect or impact on temperatures...either raising or lowering them.

There is something going on in America in the late 1950s. The GI's who got the GI bill....went off to college...free of charge...and wrapped up a degree. They went out to the real world...and then found that industry was in 4th gear....and this involved pollution to some degree. The guys with science degrees discussed this...but couldn't get a full grasp on the "problem".

Here was a "problem"....so naturally, it needed to get fixed. You can only do this with the Government funding....with scientists and engineers involved.

Dave's "curve" keeps showing a steady rise in CO2...which was bad....at least for the people funding this stuff.

So the 60's come....and along comes this United Nation's bureaucrat...Maurice Strong.

Maurice kept looking for problems to get his dream of a one-world government going. Maurice found this wonderful group of beings....mostly scientists, environmentalists and political operatives from the UN to form up this dream of his.

Somehow....Maurice eventually came to this idea of developing his world dream where payments from the advanced nations went to poor nations....because of climatic damage. You can guess the cause....burning of fossil fuels. He devised a UN group....whose sole purpose....was to sell this fossil fuel stuff.

By this point, Roger was working hard....and by a mircle....was now politically active. Shocked? Roger was lined up and thought he was going to end up as the Chancellor of the new campus at La Jolla. Roger....sadly....lost.

Roger decided that things weren't running like he thought they should....and ended up moving to Harvard University in 1963.

So at this mighty moment in 1963...Roger came to be a professor in Harvard...and had a student in his class.

In this story...it's the student that matters. The student came to understand everything Roger taught...except the idea of making money off government funding and the concept of bogus data. The student never asked many questions...because he really wasn't into this science stuff. Sadly, for you...without the questions...he never grasped the whole game.

You know the student...that's the woeful part of this story. So this is how the student....Al Gore, Maurice, Dave, Hans, and Roger came to be.
at Thursday, July 09, 2009 No comments:

Briefly, the deal at the G8 conference? The US and the other seven richest countries....agreed to the goal of keeping the world’s average temperature from rising more than 2C (3.6F).

Then the boys all agreed to cut greenhouse gas emissions by 80 per cent by 2050.

I pondered these statements for five minutes. First, if you just fixed the 500 corrupt temperature gauges that the US uses at its monitoring stations....you know...the ones that are 3 feet from the AC unit or mounted within six feet a concert surface, or within twenty feet of a eight-lane highway...then the temperature across America would decrease by two degrees on average within just a year.

Third, if a bunch of guys showed up at your church and wanted to make an agreement to do something by 2050...how serious would you take them? How about ten guys showing up at your legion hall talking about a new agreement to cover things up to 2050? How about five guys meeting and agreeing that the National Baseball Rule Book is corrupted and rules will change by 2050? How about seven women meeting and agreeing to lose 50 pounds each and be married to a rich banker by 2050?

Fourth, frankly...I have serious doubts that I will be living around 2050 (99 percent sure). So these dope heads meet and issued some agreement....where they will all be dead and buried? And what happens if things change in ten years?

Finally....if God came by and said he was going to pursue the master plan of raising the Earth temperature by 3.1 degrees...who do you accept....God or some dimwits from the G8? 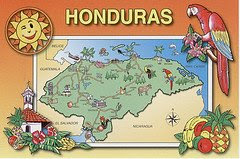 So what is the former Honduran President....kicked out because of his fix for the constitution really listening to?

Today, via several media groups, we are hearing that the current government of Honduras is talking to some minor degree to the ousted President.

What could be offered? I sat and thought about this for a while. They could offer to let him back in and just sit out the remaining days in office...with no change on the Constitution. My guess is that he really doesn’t want to do that. They could offer to amend the Constitution by the rules already written into the Constitution but part of the problem there is that the majority of the Honduran Senate vote today and in twelve months...they vote a second time (both in the majority). This doesn’t help the current problem at all.

A second offer could be to return...face charges before the senate and be tossed by legal means....but what idiot would agree to do something like that?

I’m thinking the primary deal that this guy wants...is to have a national vote now...in the next month...and just let things happen. Neither the Honduran Supreme Court or the Senate....will agree to that.

So we basically get lots of great press coverage in Costa Rica....with a number of CNN-type reporters sitting around in the hot sun and just asking “are we there yet”, and probably a high consumption of booze by all the players. Toss in a full house at the Marriott hotel, and it’s a pretty neat party.
at Thursday, July 09, 2009 No comments:

The Stimulus Which Wasn't a Stimulus 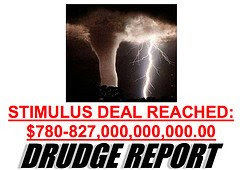 Some experts have finally sat down and analyzed what happened with the stimulus package of fame from February. They’ve basically admitted in public...that it really didn’t stimulate anything and was more designed to simply pump up some state-by-state resources and just get them by for a few months. Some examples include teacher pay....which simply helps the state avoid financial problems for this year on that pay issue.

Some folks are rather shocked....they were thinking that it’d actually help to stimulate the economy. The other shocker is that the vast amount of money linked to the package...has yet to be spent, and may not even be spent this year.

So this really brings on woes and sorrows for the administration and political folks. The solution: stimulus II.

The neat thing about stimulus II...is that you can already figure that it won’t accomplish much more than stimulus I. Therefore, stimulus III would likely occur by December.

Could you avoid stimulus II and really fix the economy to some degree? Yes, simply hand out a $600 monthly tax refund check to each family and a $250 to single folks. Do it twice this year. The money will flow quickly into the private sector as people buy tires, books, or simply take a weekend trip to Vegas. This has been proven on numerous occasions to work and helps to bump the economy quickly.
Will they take this action? No.

So there are busy people working right now....trying to calculate more bridges to be built....more teachers to help over the hump....and more roads to rebuild. The money? Well...it won’t be there this year....and it probably won’t get delivered next year. Pretty system....like being at a bar that promises free drinks but continually offers you tap water.
at Thursday, July 09, 2009 No comments: