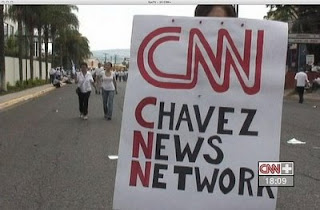 There in the moist and tropical jungles of Central America....a mustached gentleman with a Glenn Ford-style cowboy hat....sits in a sport utility vehicle....and is mounting a caravan. Typically, in Bama...we’d say convoy....but the CNN folks who are in the hot, damp, moist, and humid jungle....think that caravan is a better term. It sounds almost British.

Deposed Honduran President Jose Manuel Zelaya has decided enough is enough....he just can’t wait anymore....and has begun the grand tour of Nicaragua to Honduras. Zelaya supporters are in the group....along with a dozen or more reporter SUVs.

The plan? He’s driving up to Esteli today....which is about ten miles from the Honduras border.

Esteli is a fair sized town...100,000 folks in the region. There isn’t a McDonalds there....but they do have a couple of 2-star hotels. I would imagine the boys will stop for the night. Reporters will try to buy up what cheap booze exists in the town and prepare for the grand arrival in Honduras on Saturday. Course, he might decide to pause in Esteli for Saturday, Sunday, Monday....heck, maybe for the entire week.

The CNN team is probably desperate at this point for a grand show in Central America. They’ve come across as lacking any knowledge or understanding of events in Honduras. They will likely run live all day on CNN International (my least favorite channel) on Saturday.

What should we expect. Troops will be at the border. They will stop the convoy. Words will be exchanged. What Zelaya is hoping on....is the Tony Noreiga-scenario.

What is the Tony Noreiga-scenario? Well....when Omar Torrijos....the grand President of Panama was kicked out in the mid-1960s. Omar spent a day or two in Mexico and then decided....what the heck....he’d fly back into Panama.

Omar was smart and gutsy....he picked David....which is a bare remote outpost in northern Panama. David has one runway...barely 5,000 feet long. It had one small battalion of barely 100 soldiers and one commander of no real significance in the entire country....Tony Noreiga was that commander.

Omar lands....sits down with Tony. And then Tony says.....we are with you, and off to the capital city of Panama....go this convoy of twenty military vehicles and some staff car with Omar and Tony inside. As they progress in the summer heat....or winter heat, take your pick.....phone calls go out across the country and the guys in charge start to freak out.

Tony had barely 100 man with him. It could have been 10,000, as far as the new leadership in Panama cared. So the two guys who ran the coup in Panama (and it was a coup, no doubt).....jumped up and left the country.

So no-name Tony is promoted to the Chief of Police and Military, and Chief of Intelligence. Tony bypassed the normal system of promotion and then suddenly was number two.

I’m thinking Zelaya is hoping on the same scenario. Somewhere out there....in the hot, moist, humid, freaking jungles of Honduras....there is some junior officer with 100 men. If he switches over to support Zelaya....the road to the capital is clear.

My guess? Zelaya is dreaming and there was only one legendary Tony Noregia.

And CNN? Well....they will interview Zelaya hour after hour....making a legend in CNN....and later a great follow-on after Wolfe's show on Sunday mornings.
at Friday, July 24, 2009 No comments:

It was quiet a shocker.....the President saying “stupidly” and aiming it toward some Boston cop. Then the President said he was shocked anyone cared about what he said. Then he couldn’t apologize for anything said....because he still meant it. He did want to indicate that he thinks the sergeant involved is an outstanding police officer.

This is the kind of mistake you’d expect from a first-year CEO or university president who doesn’t have much leadership or executive training. You tend to calculate your statements ahead of time and then measure the pain that your institution will bear after the statement. In this case....he never did, and his associates who he relies upon to make up for his lesser skills....never did either.

I was hoping that would be it...but then the cop involved....has made direct comments back at the president. Then, the entire cop organization of Boston...have surrounded this guy and voiced their support. Will the media just allow this to drop? That’s the real question here now.

So you’d think that was it....but then Non-Czar Hillary....working as Secretary of State....decided that she’d label the North Koreans as a bunch of “kids”.

Apparently, the North Koreans stood up and then labeled Non-Czar Hillary as a "primary schoolgirl" and calling her unintelligent. They hint now that talks are finished and completely dead. Even with bailout and stimulus offered....they even called those offers “nonsense”.

Hillary’s mistake? The same as the President’s mistake. There is a fundamental lack of leadership and executive skills in both cases. Both individuals are acting like they are in a political campaign in Illinois or Kentucky.

It took me fifteen years in the Air Force to grasp the significance of a commander getting his speech ironed out prior to a meeting or a unit-call. People rely on leadership to deliver a concise and dynamic idea. I once sat in a one-hour meeting with a new 1-star general....who gave us a speech that had nothing to do with our mission, our focus, or our interest. He was our boss and we just sat there in hopes that this would eventually have a purpose....but it never did.

The first time I ever came across a knee-jerk reaction commander....he had made a decision with half the information that he needed for the situation. Rather than wait another twenty-four hours....he reacted....wrongly. He was fired seven days later because his boss lost confidence in him.

This past week....over in France...there was a curious episode that falls into this line of thinking. A fire erupted near a military gunfire range. This was over near Marselle, France (southern side against the Med)....and some Foreign Legion drill instructor apparently decided....against the orders given to him....to use tracer rounds. Its been awful damn hot and everything is dry....so using these kinda rounds is just plain stupid.

For you without a background in the military....tracer rounds are great at night because they illuminate the air and you can see what you are firing at. Kinda like the 4th of July in a way. But they carry a incendiary mixture. So they set fires easily...especially in a dry area, which this was. So a fire started up and burned around 2,700 acres. Houses were damaged but no deaths.

Apparently….as the firefighters and cops got around to discovering the cause….they just went ballistic. The local police chief went out and strongly criticized “the imbecilic actions of the military”.

The military has suspended the guy who gave the local order to do this and they are kinda sorry....but the real problem is that you see a guy who should have been thinking about his actions....since he was in charge....and done the right thing.

Leadership is a funny thing....you have to carry enormous weight on your shoulders.
at Friday, July 24, 2009 No comments:

The Right Guy for the Wrong Job

My associate at work has been working on a humanitarian reassignment....ill health in his family....and the Air Force tends to be somewhat compassionate (at least they make the attempt). So they came to agree with his request this week. He is fairly happy about that part. But in approving this episode....there is the problem of what job they are giving him.

He's kinda like me....in the intelligence field....although he's a guy that tends to ask alot of questions and then ask more questions, and then asks more questions. The Air Force needs guys like him. He is fairly intelligent and actually can react to a conversation and think while on the run.

Sadly, he's from the Dakotas....and there wasn't much of a choice on bases where they could offer him a position. So he's going to a certain base and will be leaving intelligence for a while....to be in services. Yep...services. You know....those folks who run the library, the gym, the base hotel, the chow hall, the baseball fields, the recreation center, the golf course, and the after-school activity center for kids.

If you had to pick the wrong job to hand this guy....this would be it....but for different reasons.

He will begin analyzing these guys on day one....just like an intel guy, and then start to take apart their programs and projects. The regular guys will be threatened by this. He will actually start to make them think about their strategies....which most of them would just like a simple 9 to 5 job. He'll ask customers what they really want.....which will bother the regular crew.

The plus side of this...is that he just might bring thinking and analysis into the services crowd. He might actually make people think and vastly improve what they have. He might actually turn the base club into a profitable enterprise, or make the chow hall into a gourmet restaurant where people beg to visit, or turn the kid's center into some giant motivational center. He might force the library into having a Socrates day once a month or get them to acquire a huge Greek-thinker's collection of books. He might convince the golf course to start up a housewife's association and get 40 non-golfer gal's started up and becoming significant golfers.

So in the end....they probably did bring the right guy in for the wrong job. Call it an accident or just plain destiny....but it's like bringing booze into a Bama dry county.....something is going to happen for sure.
at Friday, July 24, 2009 No comments: