Somewhere over in DC today....senators and congressmen wept....the "cash-for-clunkers" effort had sunk in just six days. They were happy a month ago....discussing this on TV and openly bragging how this billion would make America great again. The GM, Ford and Chrysler guys compared this effort to like Moses holding back the Red Sea.

Yep, it took six days to spend a billion....so how long does $2 billion last? Maybe another ten days at best.

My guess is that the bulk of guys interested in doing the clunker deal....didn't show up during the first week. So I think almost seventy percent of America....has yet to show up at GM or Chrysler to get their deal.

The curious about this whole mess? The guys who designed the $1 billion "cash-for-clunkers" deal? Its the same group designing the universal health care program. This worries me.

Your tactic on Monday? I'd be first down at the Ford shop and beg the guy to sell you a Ford. Tell him you hate those damn Chrysler guys....bunch of Democrats....all of them. He'll probably hand you an American flag as you make the purchase, and give you a case of Pabst Blue Ribbon.
at Friday, July 31, 2009 No comments:

Six Days of Clunker Heaven, Then? 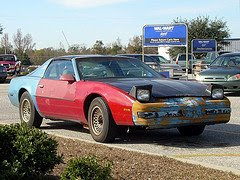 So.....barely six days into this....and to be truthful....the money was gone by the end of the fifth day....the "Cash for Clunkers" campaign is hereby suspended.

The White House is having an emergency meeting and basically asking "how the hell did this happen"?

The amusing thing is that a number of people were in the mindset of going over to the Chrysler dealer or GM dealer....and getting a significant deal, but hadn't made the trip yet.

What happens now? I'm guessing that amongst the billions laying around....they will find $3 billion more....to carry it through mid-August, and then terminate it. They will announce it by Sunday (nice to have a chat-show topic).

Here's the thing....if you were ever thinking about doing this....you've got to start on Monday and have the deal signed by Tuesday. My guess of the $3 billion extra placed on this....is that it will barely last ten days, with a massive flood of buyers coming in.

Was it a failure? Well....maybe it should have been $2k max. If it barely lasts three weeks total with the original one billion and another three billion infused into it.....then I wouldn't be bragging too much about this. And what you have to remember.....Ford is making big money off this deal too....and they were already in a very good position to start with.

So as the sun rises on Monday, and you look at that clunker of yours.....don't even stop for donuts or coffee.....go straight to the Ford dealer and make your deal.
at Friday, July 31, 2009 No comments: