I spent an hour this morning...pouring over "Dead Horse" management concepts....most are worthy of a major book, if folks would just bring them all together. So I found these eight concepts which fit in the modern era of management thinking:

2. Denying the existence of the dead horse, until the story appears in the Drudge Report, upon which release ready-made PR featuring the dead horse 'in action', thus totally fooling everyone who thought the horse was dead (but it still is of course).

3. Bringing in a team of expensive external consultants to focus on dead horse optimistic views.

5. Setting up a free-phone customer service hotline to handle complaints relating to the dead horse fiasco.

6. Setting up an inquiry into the dead horse, preferably headed by a dead horse and answerable to other dead horses.

7. Appointing a top advertising agency to promote the benefits of the reduced carbon hoofprint of a dead horse compared to the ridiculously out-dated and unsustainable notion of a living horse.

8. Lobbying ministers and pressure groups for the extension of European standards to encompass the special qualities of dead horses. 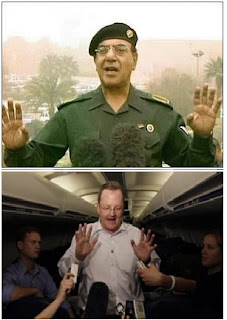 Once a PA guys raises his hands....he's pretty much giving the "fake" signal and you just need to accept what they are saying because they have nothing else to contribute.

It doesn't matter if you are a Saddam PA guy or White House PA guy....it's all pretty much the same.

I remember once in intelligence school....a brief moment of discussion on presentations and what to do or not to do. The instructor came to the hands situation.

You keep your hands low and don't allow them to be part of the "act". Unless you are pointing to something on the map or chart....don't raise them up.
at Friday, August 14, 2009 No comments:

Email in the Heartland 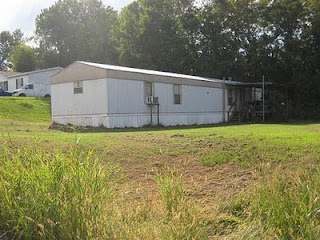 So the push is on. The White House is busy at work, pushing email to various people, all citizens of the great nation....that offers various reasons to support the White House health care plan. The email is supposed to help debunk all of the lies involved.

So this email business is supposed to sweep America and set facts straight.

I sat there, pondering this. I know the heartland. I know the people who live in the heartland. And I know that there are tens of millions of Americans who don't have a computer or internet access....NOR do they care if you offered to them free of charge.

In the state of Bama....out of people over the age of 60....I'd make a guess and say that barely ten percent have access or have a computer in the house. In the age group of 25 to 45 in the state...I'd say you'd be lucky to find fifty percent who have a computer in the house. Most have it for Johnny Junior, so he can say in school that he's got a computer. Whats Johnny Junior surfing? Mostly stupid clips on YOUTUBE and NCAA football scores.

Go out to Texas....in the rural countries of the west. Out of a 1,000 residents.....maybe eighty have access to a computer....mostly to cruise hot lusty sites or to chat with women in Boston who are desperate for a Texas man.

Go out to rural Idaho. Probably half the population has a computer in the house. Of that half....thirty percent are most likely far-extremist in nature and need contact with others of their own persuasion.

Go out to Florida in the retirement communities. Almost everyone has a computer but the vast majority just use it to email back and forth with the family in Cleveland or exchange family photos. Beyond that, the computer is useless.

Go out to the rural parts of Tennessee. Probably fifty to sixty percent of the homes have one computer but it's most used for E-Bay, flea-markets.com, and lustyvolunteerbabes.com.

The amusing thing about this new effort to get the message out....via email.....is that barely forty million Americans will read it. Another sixty million Americans might get it in their mailbox but that's because their liberal neighbor signed them up at the White House site (just to tick them off). Those sixty million will delete it before it's ever read.

What if a bunch of guys declare it to be spam? Well....yeah, those Yahoo and Google guys might actually accidentally trip it over into the spam box if enough guys did identify it as such.

This whole mentality of journalists and Washington DC power players....that the vast majority of America is hooked up and using the internet on a daily or weekly basis? It's bogus. It's just not happening. People have brain-washed themselves into believing that the nation is "wired".....and it simply isn't.

You could offer a brand new computer and free access to the internet to my dad....and he'd readily turn it down. There are dozens of neighbors who would likely do the same thing....unless they felt getting bustybamababes.com was a priority for them.

So quietly, off in the Ozarks tonight.....at a single trailer in the midst of nowhere is Sparky and Wanda....who have the only computer within a mile of the place.

They've logged on and opened up their email....and there is the president's message on health care.

They see two messages behind it on how to buy enlargement cream, guaranteed to work or double your money back.

They see another message on free vacations to Mexico if you just give your name, bank number and social security number.

They see a message on how to get a free green card and become a legal resident of America.

They see a email on certified car mechanic classes in Little Rock.

Finally, they see a email from cousin Candy who is living up in Detroit and is asking for $700 to help with a problem she has (something to do with her man whose been arrested for beating her).

They click the mass delete button and purge the whole mess. Sadly, the White House message is never read.

Thats life in the Heartland. It's fairly simple.
at Friday, August 14, 2009 No comments: