Hes the guy who dreamed up the attack on 12 October 2000 on the USS Cole....where 17 American sailors died.

Nashiri eventually became part of the Attorney General's investigation of the CIA and its harsh interrogation methods.

In the midst of this interrogation of our friend Nashiri...the CIA inspector general folks discovered a terrible thing.....CIA officers blew smoke in Nashiri's face. In fact, they even used....cigars.

The IG report go through these episodes of smoke-blowing as one of several "unauthorized or undocumented techniques".

In fact, they discovered several such episodes....against high-level al-Qaida members.

I sat here....thinking over this. All those 12-hour trips in the family car with my dad....when he'd smoke two or three cigars....with the windows closed and the AC sucking air in and reusing it. Where was the CIA inspector general then? Why couldn't I get Attorney General help on this kind of stuff?

What about the air flights back and forth across the Atlantic....where folks smoked an entire pack of smokes in one flight and I just sat there?

What about those Italian restaurants I sat in....where the customers smoked those lousy stinky Italian smokes?

And now....this becomes part of the dump on the CIA? Is this right?

Frankly, at this point.....I start to laugh. For every American captured since 1945....they would have begged to have someone smoke in their face rather than physically beat them like they were. And the Attorney General's best efforts involve a report like this?
at Thursday, August 27, 2009 No comments:

The Pentagon apparently went out....contrary to the comments spoken....and rated the work of reporters covering the military in Afghanistan.....as “positive, “neutral” or “negative”. Yes, shocking isn’t it?

Various news sources are shocked by this. Some reporters are furious.

The Pentagon came to view stories, and then graded them.....yes, absolutely shocking.

Well....let me introduce to a little secret. They’ve been grading them for decades. Every story was evaluated and seen in a positive, neutral or negative light. They’ve passed around the stories to read, and even commented what grade they gave them.

Whats funny here....is that they could have removed the grade....and 99 percent of the military folks would have graded them on their own....with a 99 percent accuracy level....with the same words of “positive”, “neutral” or “negative”. Shocking, isn’t it?

So you want a bit more of shock? The reporters who constantly write “positive” or “negative” stories....usually a trend in one direction with one guy, and another direction with another guy.....have an agenda. Yes, an agenda.

So then you are left with these guys who write....neutral stories. They tell the facts and let you decide where the truth lies. These are the dangerous folks. They actually want you to read everything and decide for yourself. In a modern world like this....can you trust such a reporter?

So tonight, sitting in some bar or pub....there’s some reporter sitting there....reading over this and grasping that of the 400 stories that he’s filed since 2005....almost all of them were viewed as “negative” by the military. He’s probably pouring doubles and grinning ear to ear. Tomorrow....he sits down and starts writing the next negative story. Life keeps running and he keeps writing...his way.
at Thursday, August 27, 2009 No comments: 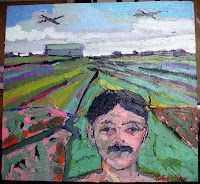 As some of you know....I work around the AF headquarters building on Ramstein. From time to time, the appearance of the entryway changes. This week....they bought some swanky new leather chairs and couches, and then they put up new art work.

It was the art work yesterday that caught my eye. It’s “different”. Typically, you’ve got those $2k pictures up there...fancy planes and aircraft. Yesterday was different. So by mid-afternoon, I found out that the 4-star painted it. It was a fair shock.

Throughout my entire association with the Air Force...from 1977 on....other than a couple of young senior airman on base....we never had anyone, especially an officer, who painted. So this is a rapid departure from the “norm”.

It’s hard to imagine a artsy Air Force. We are known for writing 1,000 page summaries or 140-slide presentations....not for painting fancy stuff. Heck, we have problems just painting buildings on base in the right tint.

So I’m standing back and waiting for the next round of this. For some folks....it’ll be a tough transition. Some of these guys may have to start with paint-by-the-numbers kits and establish themselves this way. But maybe in the end....we end up with bunch of guys who have an artsy reputation.