The Guards You Depend On 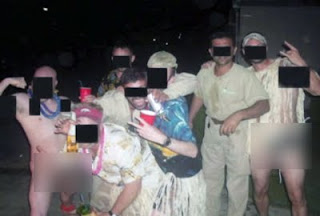 The State Department contracted out the guard duty at the embassy in Kabul, Afghanistan....with one company. I won't go into great detail.....it's on virtually very single news group now. The boys hired....for over eighteen months....got booze nightly (while in a war zone), hookers, and pretty much got out of control.

There's alot to say, but I'll just say three brief comments. The State Department needs to terminate this contract immediately and send the whole crowd back to the states. Forget about a second chance or letting them fix their problems.

Second, whoever you bring in next.....bring them into the room and arrange for their pay to be held by half until they finish their tour. If they are found drinking at any time....they lose the money put to the side and sent back to the US within twenty-four hours. If you are in a war-zone....you act like you are....and not like a bunch of kids in college.

Finally.....the behavior demonstrated here....isn't what you'd want to depend on in a contingency situation. I don't have an issue in letting a guy fly out every 75 days and get seven days of R&R at some place where you could drink and do whatever you wanted. In fact, I'd strongly encourage this type of tour. But you can't let this occur again.
at Thursday, September 03, 2009 No comments:

A Friend of My Son

Summer of 2008, my son did a two-week “apprentice-practice”. Throughout the eighth, ninth, and tenth grade in the German system….you do this. The key element is that you are trying to find your vocation.

So this two week period was spent at a local trucking company that did long-haul trucking in Germany. It was a small operation….with five guys in the planning office where he sat. The boss was a football-coach type of guy and probably made a good impression on the kid for that period. Also in the office was a third-year apprentice by the name of Patrick.

My son connected to Patrick immediately….they were both World of Warcraft gamers.

Tuesday of this week….Patrick left work and stopped two or three times on the way home. Somewhere along this route he travels….there is a village. In the midst of this village…this drunk guy stumbled along the sidewalk and did a 90-degree turn and walked right into Patrick’s car. The speed limit was 35mph.

The drunk was dead the minute he hit the pavement.

The cops came and apparently had a witness. There is no doubt to Patrick’s innocence. I kinda feel sorry for the kid. He’s 21 and this isn’t a situation that he could have avoided.

His boss apparently is giving plenty of time off....no questions about that...which might be a better deal than most folks might expect.

This is one of life’s lessons…sometimes, you are an unwilling participant in a tragic circumstance….you play your role and simply try to move on….for better or worse.
at Thursday, September 03, 2009 No comments:

After the rounds yesterday of Van Jones referring to Republicans as “assholes”…..today, he said he was awful sorry.

So the best we can say…is that it’s ok to say this stuff as long as you don’t work for the President….and then it’s highly inappropriate.

I would imagine that Van and the entire White House staff currently consider Republicans to be cute cuddly teddy-bear type of folks. Well….at least I get that impression from his comment.

Maybe one of you should ask the President at one of those press conferences.
at Thursday, September 03, 2009 No comments: