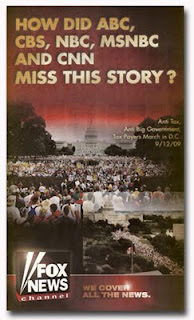 This week....Fox news decided to come out and ask some folks how they missed reporting a story.

Frankly, ABC feels the same way. They spend twenty-four hours building an entire 22-minute news episode.....with the newest President Obama angles, the newest juicy President Obama tidbits, and the newest inspirations from the White House. Frankly, they just don't have time to waste on stupid people from the heartland.

From CBS....Katie is running her butt off....trying hard to tell twelve lousy stories that barely work. There are hundreds of writes and rewrites....with barely any croissants or jelly now available because CBS cut the budget even more. Adding to her frustration.....while being number three of the three network news teams....she is constantly now being given medals, awards, and knickknacks for her hot style of reporting worthy news.

From NBC.....it's a tough deal.....they barely can report anything with a straight face. They keep wanting to insist on exclusive news bits but then you turn to Fox and find the same damn story. The NBC guys are always on the prowl for some Republican governor who claims off to the Appalachian Trail....so they can note his party on the magic line....but work extra hard to erase any party mention of any Democratic Senator caught in a corruption episode.

From MSNBC....they are mostly weeping over this accusation by Fox. They tried hard to tell the story but everytime they mentioned a mere 10,000 spectators at the Washington DC "Tea Party"....everyone in the background started snickering. Then they tried to do interviews with the nutcases, but they call came across as regular heartland folks so they had to trash those interviews. Then they tried to find some radicals but they got kicked out of the area for looking like fake journalists.

Finally....the group that Fox wouldn't mention....NPR....well....they would have covered it but they were all at the Peabody or Wolfe-Jones-Smith or Calisle Group awards ceremony. Several of the bigname NPR folks were simply out of country....looking at fresh melted glacier water at the South Pole. A couple of guys were sharing some pinecone treats at a foresty rehab party in Idaho. And finally four of the NPR guys were in Red Bay, Bama grilling catfish and guzzling beer...and telling everyone how they fake out the NPR management by pretending to be liberal but they aren't.

Fox.....it is shame that you bring with this ad. You shouldn't pick on the little guys like this. They all have reasons for their failure....you should just let it stand.

Finally....frankly.....for Rick Sanchez of CNN....who tried his best to defend against the immortal Fox team.....get more emotional. You looked too professional. You need to show some tears....get irate....slam your shoe on the desk.....and tell the public that you won't take this bullying anymore. Then vow to walk with the "Tea Party" folks to the gates of hell. I realize this is asking for alot.....but for CNN's sake.....it just might be fake enough to convince folks you are actually neutral.
at Saturday, September 19, 2009 No comments: