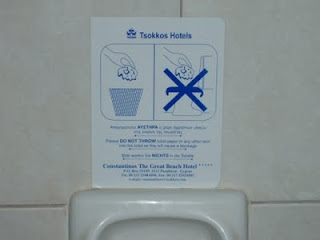 This is a topic that I'd normally avoid chatting on.

I checked into the hotel and discovered rule number one while in Cyprus, you don't flush your wiped toilet paper. You open a can next to the toilet, and toss your 'used' paper into the can and close the lid.

The thing about Cyprus....they have have low water flow....and paper has issues in flushing.

This was a learning experience.....using single ply toilet paper....and then crushing it enough to toss into a can.

For a Bama guy, this was a harsh lesson in life. I eventually got trained, and can actually use four sheets for the first wipe and and three sheets for the second wipe. This is probably too much information and you might be trying to visualize this...so it's best to say that Cyprus doesn't have any issues with pipes clogging up. I didn't ask where this can gets dumped but I'm guessing some guy named Nicolas picks up this mess and burns it somewhere. I could see a downwind issue here.
at Sunday, October 04, 2009 No comments: 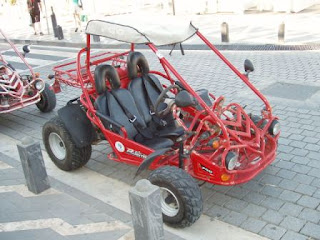 For around $75 a day on Cyprus, you can rent this little buggy. It's tagged, and legit. Top speed, maybe up to 45mph. It's questionable to me if there is any real protection if you have an accident. It comes with a simple two-gallon tank so you might get an hour or two out of it.

No, I didn't rent it.....after reviewing my rules of safety....I decided against it but I was tempted.

It would be a neat vehicle to have in Bama and mount a shotgun on the side for hunting.
at Sunday, October 04, 2009 No comments: 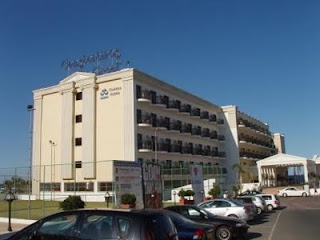 So I wrapped up a week in Protaris, Cyprus. I took this all-inclusive deal....food and beverage....via the Constantinos the Great Hotel....which lies on the far eastern side of the isle.

Cyprus is not Crete....and it's a bit different from any place you'd go in the region. Brits made the original rules and set the stage for what you have today.

The hotel....frankly....was not a 4-star plus hotel....but it had some pluses. The bar's in the place....all three of them....are run by Russian guys, who I learned....make pretty damn good bartenders.

The drinks....yep, they are all watered down and don't even think about getting drunk unless you really do up red wine that tastes like bad grape juice.

The food? They ran an interesting deal. Breakfast was pretty much something you couldn't screw up. The curious thing was that they served french toast without syrup. The lunch? The best grill ham and cheese sandwich on a sesame seed bun that you could ever eat. Dinner....a huge menu line but I'll admit 60 percent was typically stuff I wasn't really into eating.

The British versus the German thing? Well...yeah. It was around 60 percent of the folks there who were British.....and these two groups simply don't mix well. Ten percent were Russians....and they mix even less than Brits with Germans.

Protaris? Well....picture Myrtle Beach.....charged up with forty bars on a strip along the beach. You can walk from one end to the other.....sipping at any place you desired.

Costly? Cyprus is a place with different degrees of cost. If you escape Protaris and go to the inner areas of the isle.....then its all affordable. Drinks can run around $4 for a beer along the strip.

Temperature? It's early October....and it was still burning 88 degrees in the daytime. They brag over the 320 days of sunshine per year.

So if you were looking for an unusual place to go.....to sip beer and feel pretty safe around just half-dunk Brits....then Cyprus might be your place.
at Sunday, October 04, 2009 No comments: