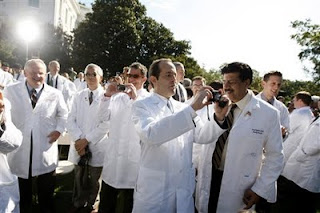 So it was a grand episode at the White House today....they got 150 doctors from fifty states to show up and "dress-up" for support of the universal health care bill.

The picture was something I looked at for two minutes. You just don't ever see 150 doctors in "whites" unless it's a train crash or hospital evacuation.

I paused for a while and looked at another medical story about five items down....a fake kit that some Chinese medical company developed....the "fake virginity" kit. Some doctor and medical research...has helped the Chinese to develop this funny salve stuff that makes things kinda "stick" and then the gal acts all surprised and hot that her new husband was "the first".

Note, I didn't ask many questions over the virgin salve involved...I'm sure these Chinese medical experts did a lot of research and development testing....maybe down in New Orleans or at Fort Lauderdale.

Its an unusual profession...just one hundred years ago...you showed up at some state university...studied under some doctor for a year or two...and they gave you a certificate. You hauled out to some town in the middle of Missouri....put up a sign...and accepted patients. You mostly handed out pain powders, delivered babies, and gave Doctor Moxley's mineral spirits (45 proof). You were an expert because you had the sign, the certificate, and the only guy who could stand in a pool of blood when chaos was in full reign.

I started to wonder if the trick to getting people convinced of the universal health care bill was just to produce guys in white jackets to convince you. Could a used car salesman show up in a three-piece suit and sell you a car with 120,000 miles? Could some real estate guy in a suit of armor convince you of his honest intentions? Could a banker with a degree from Harvard Business School convince you of his competence?

After a while, you start to feel uncomfortable. It's kinda like some new husband who's just cleaned out the house trash and noticed some kit in the trash pile..."fake virginity kit" listed on the side. Maybe things aren't what they seem.
at Monday, October 05, 2009 No comments: