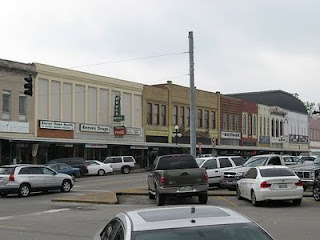 The third of my ten cities blog.

I grew up about fifteen miles from Pulaski, Tenn. It's best to describe Pulaski as a town which barely advances. It's population....barely 7k.

It's the square to got me addicted. In the center, lies the county court house...and surrounding it is the square. The square is the draw....with almost twenty-five businesses facing the court house. None of them ever pulled a huge profit in...they were above average businesses and mostly made a sell on a smile and a extra bit of effort in what they did.

It's something out of the 1950s and the people you meet....are like characters from Mayberry. It'd be awful hard to find someone of a bad nature.

About a block up the street is the county newspaper. Another block past that was the Dairy Queen establishment. Going downhill, about a block was the best shoe shop within fifty miles with a guy who personally repaired everything he sold. My dad probably invested fifty bucks a year on shoe repair at this shop.

At some point about twenty years ago....Wal-Mart came to Pulaski, and I figured it would eventually destroy the downtown area. I was wrong......folks still come and go there....looking mostly for the stuff that Wal-Mart won't sell.
at Monday, November 02, 2009 1 comment: 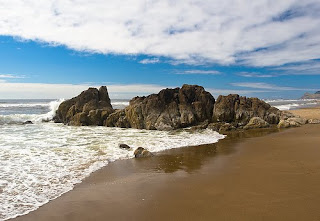 Along the coast of Oregon, about an hour or so north of Coos Bay, is Lincoln City. It's not a huge or significant town. It barely has 7k in population.

I spent two entire days around the area back in the early 80s....mostly around the beachfront. It reminded me of some coastal town in the 1950s. It's not overrun with tourists or weird folks.

The funny thing about Lincoln City....was that up until 1965....it was three separate towns along the beach which kinda touched each other as they developed and grew. At some point in the early 60's....some folks got the idea of just making it one town....so three other towns basically disappeared.
at Monday, November 02, 2009 No comments:

Well.....after a short phone call to the garbage folks....they are sending out another can this week. Apparently, they admit that they use a method of collection where the can might accidentally hang on the truck hook (it's all automatic and run with one guy sitting in the truck)....and toss the can completely in the back. And no, the driver won't retrieve it. So you more or less just hint this....and they are forced into bringing out another can.

I listened to this....and think it's a bit silly. They literally toss your can halfway into the truck with umpteen pounds of pressure....and it just keeps going if it wasn't hanging on good.

I still think the neighbor took the damn can, but what the heck....I'll have two if my old can shows back up in two weeks.
at Monday, November 02, 2009 No comments: 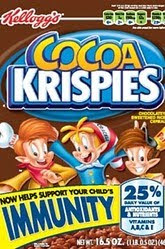 The blunt truth is...just as much as all 99 percent of other cereal....it has vitamins A, C, and E...which means it has some health aspects which might be a plus in your daily life. In terms of anything else toward immunity? No.

It won't save you from the flu, the cold, or forty-four other ailments that you could catch...including herpes or syphilis.

But you have to admit....staring at the box there in the aisle....ever so fearful of Swine Flu....it is tempting to take it home and make the kids eat three bowls of the stuff everyday. Heck, you might even feed it to your dog in hopes of improving his immunity.
at Monday, November 02, 2009 No comments: