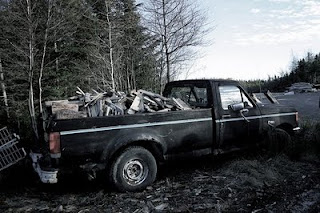 So as some dude was sitting there…typing up the cash-for-clunkers program for congress, and the President. Here was this moment of deciding that some rules had to exist.

So one of these rules was that the junker you were turning in….had to get better gas mileage than the new vehicle. This was believed to fix up the case where a guy took his wife’s old car and swapped it for a new Ford F-150 pick-up. Guys will do something like that, you know.

So the AP went out and asked for the statistics of the whole cash-for-clunkers program. Then they came to a surprising number. Almost 8,200 folks….swapped their old Ford F-150, for a new Ford F-150. As the AP reports….that was an improvement of 1 to 3 miles per gallon.

Some experts have hinted that this violated the fancy rules and that the government should ask for their money back from the dealers. Since most dealers are on the verge of bankruptcy anyway….I kinda doubt this will occur.

So we are left with this curious mentality. A guy has spent maybe ten years of his life with a Ford F-150 truck. He’s cleaned it. He’s used it to haul trash, sheet metal, lumber, dirt, flea market items, old carpet, and kegs of beer. He’s probably gotten it stuck up to the axle at least once….hit a bird or two….dented the hood while jumping on top of it in a fit of drunkenness, and slipped four mufflers on it as they rusted quickly.

Yet, through all this trouble….he stuck to the Ford F-150. As many problems as it triggered….he couldn’t think of another vehicle he’d rather have.

What the AP guys didn’t tell you….was the state-by-state percentage. Of the 8,200 folks….I’m willing to wager 6,000 of them were from Bama. As one guy did it…his neighbor observed this….and did the same thing.

So right now….slyly sitting is Ford….smiling quietly…avoiding a grin. This whole deal was a favor in some mad fashion….from the government….to Ford and a bunch of die-hard F-150 fans.
at Tuesday, November 10, 2009 No comments:

So lets get this straight….the shooter at Fort Hood….a hardcore Islamic dude….just a week or two prior to the shooting….paid cover charges and sat for six hours at some strip bar in the local area?

Most guys, if they go into a strip bar….they go with a group of guys….buy two or three drinks over 90 minutes….watch a couple of shows….and then leave.

In the office, we discussed this bit of news. Amongst six guys….I couldn’t find anyone who ever sat for more than two hours in a strip joint….with most admitting they never stayed more than an hour or two drinks at some club like this.

It’s just another indicator of a nut, hiding behind various fronts (Islam, Army uniform, etc).
at Tuesday, November 10, 2009 No comments:

“We love death more then you love life!"

This was the quote used by the Fort Hood shooter months ago….go explain the whole Islamic conflict to people in an audience.

I sat and paused over this one-liner. It says a lot. It’s hard for me to imagine folks in this frame of mind…unless they really see a plus-up in suicide. Frankly, as you start to gaze at the entire crowd who get hyper over Islam….have this mentality.

So I pondered this. Over the state of Bama…..amongst the several million folks in the state….if you walked out and asked who might feel love death more than life…..you’d be hard pressed to find a hundred folks in this frame of mind. In fact, I’d wager that if you find more than eight folks in the entire state….you’d be lucky.

This is the key problem with this religious conviction and Islam….it simply doesn’t appear to people who are happy in life. If you are taking the full breathe of life…..enjoying each morning….and eagerly waiting tomorrow…..you are a bad candidate for Islam. You’d be best advised to pass on this opportunity.

How many candidates across the US might fit into this mentality? That’s another issue. Even in Texas….I’d wager less than twenty might fit into this attitude.
The shooter used this comment to drive home his conviction to the audience, and it infuriated the bulk of the group listening….long before the end and where he tossed out this one-liner. At no point in this training episode….did any of the folks get up….which is the puzzling part of the training episode.

Here are these military folks….sitting in a seminar….and this guy launches into a 50-slide presentation over a topic that had nothing to do with what was assigned. Some folks voiced questions early into this presentation about how this related to their training requirement, and got no real defense….but sat there still. But this was a medical group of sorts. In my field….intelligence and systems….I kinda doubt that any of the guys would have sat there and taken this presentation.

So out there....quietly tonight...are a number of guys whose chief preference of thinking...is to die...rather than live. Their logic? They have so little to give in life....so they have more to give in death.

Frankly, nothing about this makes any sense. So this night will be long and without any hope for these fools with so little ambition in life.
at Tuesday, November 10, 2009 No comments: