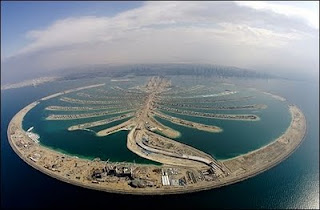 Back around 2000, I read up on this construction project called Palm Jumeirah. Basically....it was to be a man-made island...off the coast of Dubai. The company involved....owned by the Dubai government.

This project...the size of 800 football fields...was to be this luxury villa place....where only rich folks came to live and "play". Billions upon billions were to be involved in the construction....and it would cost around $10 million....just to get a very small modest apartment in the complex to be built.

This was a decade-long project. Lots of important folks have bought properties on the island....from VIPs of London, soccer players, the ultra rich of NY City, and even Russian mafia players.

From the very beginning....I kept asking....if you got all this sand and real estate on the mainland around Dubai....why the heck do you go and build this stupid island? Frankly, the only logical answer was that it was a money pit to toss money into.

So as the US financial crisis erupted last year....and lots of rich folks suddenly woke up from the Madorf dream and realized how poor they really were.....this Palm Jumeirah project started to stumble.

Now, the prices have dropped by fifty percent. The guys in charge are scared. The whole economy of Dubai is suddenly shaking over the possibility of massive failure. The money pit did exactly what you imagined. People who own properties and have yearly "fee" situations required....are now settling a $2 million property for $400k....just to get out of the mess there.

The people at the top of this mess....think it can survive and make it out of the economic problems...maybe over the next four years. Some people believe that it's not the deal that was advertised....and maybe it might just die off completely within five years.

Me? I'm still wondering why you build an artificial island....when you still got tens of millions of acres of perfectly good desert just sitting there?
at Friday, November 27, 2009 No comments: 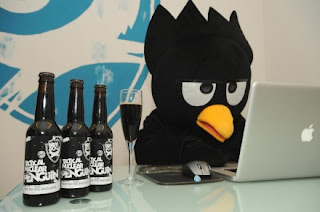 At some point....I knew it would happen. 32 percent alcohol beer.

It was believed somewhere in the Bible....that God kinda put the limit on beer not going past 4.5 percent alcohol....or least some Bama guys felt that way.

Recently....several companies had gone to the edge and produced not just ten percent....but even sixteen percent alcohol beer.

Yes, the "nuke" Penguin brew. Made by a company called BrewDog in Fraserburgh, north-east Scotland.

Here's the thing though...it's almost $45 a bottle....which probably will keep most of you away from it.

BrewDog maintains that this is an "imperial stout" which only true beer connoisseurs will consume. I paused while reading this....'beer connoisseurs'? In the state of Bama...we have well over two million such connoisseurs...but they sure as heck won't be paying $45 a bottle when they can buy Pabst Blue Ribbon for a buck.

Brewdog says they will only sell online...and at two locations in Edinburgh and London. My guess is that consumer demand and a demand for a better price...will lower this down to $18 a bottle within a month or two. They are making a huge profit off the current pricing scheme.

So you can imagine this scene....a couple of the guys come over. You pull out this case of beer that you spent $400 for....and give each guy a "Nuke" Penguin. After the first sip....they ask where you bought it....and then they mention that it's got a mighty fine punch to it. Later, after the third beer....they are laying on the porch and you gotta call their wife and come and pick them up.
at Friday, November 27, 2009 No comments: