Getting Paid to Describe a Moment with Joe? 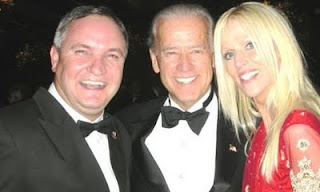 Only a moment of Bama logic. So you have this couple....who crashed a White House dinner......and now they want $300k as a interview fee with the networks?

What am I missing here?

Basically, you had a beer with Joe Biden.....and you think it's worth $300k to be interviewed about how you sipped the beer and how you shook hands with Joe? Maybe you talked Afghanistan or Delaware shrimp or NCAA football with VP Joe?

Somehow, I just can't why any idiot would pay this couple $300k for an interview....to describe how they got in and then how they sipped beer with Joe Biden.

If the Today Show or MSNBC is stupid enough to pay the money.....then it's pretty much a joke. I'd let the story sit for a week and everyone will forget the entire event. It's not like Joe telling them some super-secret thing about his house.....you know....the nuke shelter or the top secret VP recovery point in Red Bay, Bama.
at Sunday, November 29, 2009 No comments:

Email ThisBlogThis!Share to TwitterShare to FacebookShare to Pinterest
Labels: Michaele and Tareq Salahi

For those who have time....the New York Times has a great 5-star editorial today on the universal health care plan that is in the senate.

Very easily and without a lot of fluff....they point one of the main problems with the design of this bill....the public option. Based on analysis of the Congressional Budget Office....at best....it might enroll less than 2 percent of the public. So you'd have to ask why....and then it goes back to the original problem which stood out in the start of this mess...cost.

Based on the CBO work....the public option would have a higher premium than private plans that exist today. This bill would mandate that the government go out and negotiate rates with providers....the same way that private insurers do. The funny thing is that premiums....which are the number one issue in preventing thirty-five million from having health care insurance.....would go up beyond what private health care insurance costs today.

Basically....the government would have to have higher premiums to cover its share of more chronically ill folks. After cost.....the number two problem are the folks who had major health problems to start and private health care would want a bundle to cover these folks.

Remember....this 2,000-page document was written in a hurry, without alot of thinking or analysis.

The amazing thing is that if it passes....nothing happens until 2013. So both parties can go back and play their games. Around 2013....after the election....then reality hits. Who can pay for the public option insurance? Basically few, if any. So nothing really changed.

Yep, that's the entire game. Nothing changes....just more of the same. So if you started with a pound of fat.....buddy, you've still got a pound of fat.
at Sunday, November 29, 2009 No comments: