The top news bullet for this morning....of interest...was the four cops killed at breakfast in Tacoma. You see...they were at a place....around the backgate of McChord AFB.

I was stationed at McChord in 1980. It was a 13-month episode. I came to enjoy the base, the town of Tacoma, and Washington state. But it was a funny thing.....once you left the back of the base....the area between Fort Lewis and McChord AFB.....you were in this hazardous-to-live zone. Even in 1980....it simply wasn't a place you'd go after dark.

In the past ten years....that danger has tripled in nature.

If you left the main gate....you were within a mile of the interstate and on a fairly nice street. I could never understand this mess....three gates on McChord....two were leading to safe areas, and one was absolutely dangerous.

When you read the story....this guy simply walks into the diner....aims at no one but the cops....and kills all four cops. Then he walks out. No mask....no hood. He didn't care if people saw him or not.

He isn't simply a nutcase. He is a guy who simply doesn't care anymore. If he kills four people....a hundred.....it simply doesn't matter. He made that clear in the diner. And at this point....he's still walking the streets.
at Monday, November 30, 2009 No comments:

So, a moment only to analyze what is playing out. Tiger got beat on pretty good by the wife. The cops would like a statement over the accident...and likely the beating. Tiger is keeping his mouth shut. The entire accident was on private property....his vehicle never got on a state or county road during this episode. So, Tiger can pretty much say almost nothing.

The thing is....for the wife....if Tiger takes this route....she avoids an arrest over an assault issue. I'm guessing that she's now considering how nice Tiger has been on this interview with the cops.....and lessening her anger. In the end....Tiger wins. If the wife goes to divorce court...he brings up pictures of his injuries. If the marriage continues....she figures that Tiger was nice enough not to drag her in the dirt. Not a bad strategy.
at Monday, November 30, 2009 1 comment:

Raj and the IPC 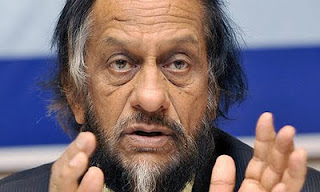 There's this guy, Rajendra Pachauri,who has an interesting job Raj, runs the Intergovernmental Panel on Climate Change (IPCC). Basically, the IPCC is THE big organization that makes global warming...global warming. If they say something....it's the blessed truth....or something like truth.....well....maybe something less than truth.

Naturally, you might ask who the heck makes the IPCC such a BIG organization....but that leads back to the UN and it's best not to bring up this subject.

Today, after this big mess with released emails and accusations of corruption with the global warming scientists.....Raj stood up....got all peppy....and then said there is "virtually no possibility" of a few scientists biasing the advice given to governments by the UN's top global warming body.

The all got into the Guardian....one of the Britain's premier newspapers.

Raj then went on to say that lot of folks write for the IPCC and they run a damn good rigorous peer review mechanism. Raj hinted....that any bias or manipulation or bad data....would be quickly uncovered.

As I read through the comments of Raj....it kinda reminded me of a bar owner trusting his bartender entirely with the stocking of the shelves.

Over the past five years.....the IPCC has had its share of comical moments. They tend to get dramatic and state the dying days of the planet are approaching. If they were truly serious....they'd start announcing the closure of airports, the termination of air travel, the halt of energy production, and the massive shutdown of society....to ensure mankind's survival. For some reason, they really can't bring themselves to suggest such a thing. But then they suggest a "tax" would fix everything....and that poor countries would get the tax.....while rich nations pay. For the life of me....I just can't grasp this as saving anything....but just delaying things.
at Monday, November 30, 2009 1 comment: